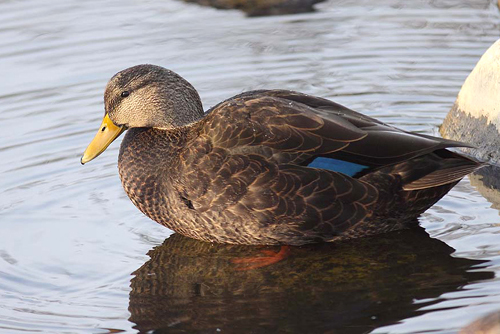 Characteristics and Range The American Black Duck is almost identical in size and shape to a Mallard and is most easily recognized when it is in flight, as the silvery underwings stand out against the dark brown body. On land or in the water, the pale head contrasts with the dark body. Females and fully-grown juveniles are similar to males, but slightly paler. The breeding range of the species stretches from the western Hudson Bay coast east to Newfoundland and Labrador and south roughly to a line from Minnesota through Wisconsin and Ohio to North Carolina. Easternmost Manitoba, especially the Hudson Bay coast, represents the western limit of the breeding range (Baldassarre 2014); however, moult migrants are occasionally found in summer elsewhere in the province. The winter range is from southeastern Canada to Florida (Longcore et al. 2000).

Distribution, Abundance, and Habitat The majority of American Black Duck records were within ~30 km of the Hudson Bay coast, with a scattering throughout the rest of the province. Nearly 75% of squares with ≥3 hours of effort in the Arctic Plains & Mountains were occupied, versus 15% in the Taiga Shield & Hudson Plains. Confirmed breeding was noted near Churchill and the mouth of the Seal River, as well as at Red Sucker Lake. Although breeding has been confirmed in the southern half of the province in the past (The Birds of Manitoba), during the atlas period all records there involved possible breeding only. The relative abundance was highest in the Taiga Shield & Hudson Plains. Breeding habitat consists of beaver ponds, lakes, streams, bogs, and marshes. Along the Hudson Bay coast, birds often feed in tidal pools, while migrating birds often feed with Mallards in grain fields.

Trends, Conservation, and Recommendations Severe declines in the population were noted from the 1950s to the 1990s, due to habitat loss, land-use changes and hunting pressure (Longcore et al. 2000). Hybridization with the Mallard is common and has probably contributed to the declining numbers during the last half century (The Birds of Manitoba). Only one hybrid was recorded during atlassing, in the vicinity of Cape Churchill, but others likely went undetected (there were reports in the non-breeding season). Range extension of the Mallard into eastern North America during the 20th century, sparked by releases of captive-bred birds, is a matter of concern for management of the American Black Duck (Baldassarre 2014). Hunting restrictions instituted in 1983 led to a reduction in the rate of decline, but it is not clear if this has led to stabilized populations (Longcore et al. 2000). Continued monitoring of the population and maintaining bag limits and a shortened hunting season would benefit the species.