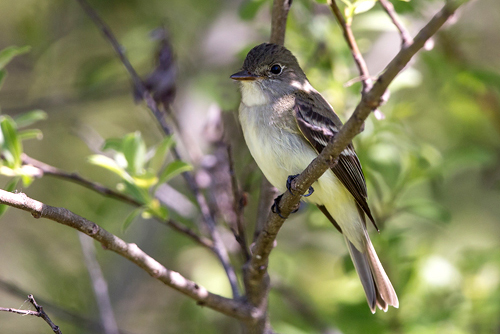 Characteristics and Range Nearly indistinguishable from the Willow Flycatcher, and formerly considered conspecific,the Alder Flycatcher can be identified by its raspy songs and emphatic call notes. It has a close visual resemblance to other Empidonax species, such as the Least Flycatcher (rather nondescript apart from bold eye-ring and wingbars), which makes identification by sound the most reliable. The Alder Flycatcher's summer range predominantly follows the boreal forest from Alaska to Newfoundland and Maine, but extending south around the Great Lakes and parts of the Appalachian Mountains. Spring and fall migration routes extend south across east-central U.S.A. into the Gulf of Mexico, towards wintering grounds in South America mainly east of the Andes (Lowther 1999).

Distribution, Abundance, and Habitat Atlas results show the Alder Flycatcher occurring almost throughout the province except the extreme northeast, much as estimated in The Birds of Manitoba, with the northernmost possible breeding from west to east at Kasmere Lake, the southernmost portion of Nueltin Lake, Munrœ Lake, and ~20 km north of the Seal River (only in three squares in the southern Arctic Plains & Mountains). There were no detections in the extreme southwest Prairie Potholes and the Alder Flycatcher overlapped with the Willow Flycatcher in only 12 squares. Abundance was highest along the southern portions of the boreal biome and were also high in the boreal-parkland transition, decreasing south and west into the Prairie Potholes. Abundance was even and moderately high throughout the Boreal Softwood Shield and the southern Taiga Shield & Hudson Plains, decreasing towards the Hudson Bay coastal area. These estimates may be influenced by this species' propensity for a pre-dawn chorus, followed by more sporadic singing and calling later in the morning. The probability of observation shows a similar pattern; however, within the Prairie Potholes, detection likelihood is marginally higher along the wooded Arden Ridge. Preferred nesting habitat includes shrubby areas alongside road margins, ditches, forest edges, willow and alder swales and creek margins, and early-successional forest regenerating after logging or fires (Lowther 1999).

Trends, Conservation, and Recommendations The Alder Flycatcher is widespread, common, and apparently stable in Manitoba (BBS data). Nonetheless, like many aerial insectivores (Nebel et al. 2010), it shows a long-term decline in Canada. The mechanisms of decline are poorly understood but hypotheses include factors relating to habitat used in migration and overwintering (Areta et al. 2016), food availability, and adaptability to climate change (Smith et al. 2015).