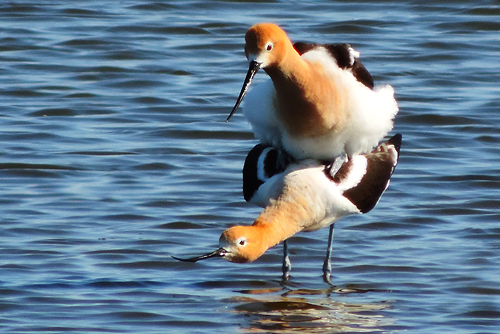 Characteristics and Range The American Avocet is a large, slender, long-legged shorebird with a long thin upturned bill (more upturned in females) that it sweeps from side to side when feeding. In breeding plumage, it is unmistakable with its orange head, neck, and breast, contrasting with black-and-white wings, white body, and light blue legs. In non-breeding plumage the orange hue is substituted for white and pale grey. The American Avocet nests in open habitats from the Prairie Potholes south to Texas, and west to the Great Basin in Oregon. Disjunct, resident populations occur along the west coast from San Francisco south to Baja California, Mexico, in southeastern Texas, and in central Mexico (Ackerman et al. 2013). The wintering grounds are mostly coastal, from North Carolina to the Yucatįn Peninsula in the east and from northern California to Baja California and central Mexico in the west (Ackerman et al. 2013).

Distribution, Abundance, and Habitat The American Avocet was found nesting across the Prairie Potholes to the southern edges of the Boreal Taiga Plains as far north as Red Deer Point and the Interlake south of Ashern, a distribution that closely resembles that of the Willet. This might suggest some shrinkage from the range estimated in The Birds of Manitoba in the area from Ashern to Grand Rapids and The Pas; however, some remote, historic nesting locales such as Kaweenakumik Lake and parts of Lake Winnipegosis were not accessed during the atlas period. As with the Willet, there were few records in the agriculture-dominated Red River valley. The probability of observation was very low overall, except for three concentrated areas in the western portion of the province: from Melita to Whitewater Lake, from Virden to Russell, and the southern shore of Lake Winnipegosis. American Avocets nest conspicuously in small, loose colonies in open wetlands and mudflats (The Birds of Manitoba). Within the Prairie Potholes, they were found nesting on sparsely vegetated ground (including occasionally at tilled wetland edges) and wetlands within native prairie, including ephemeral wetlands and saline flats.