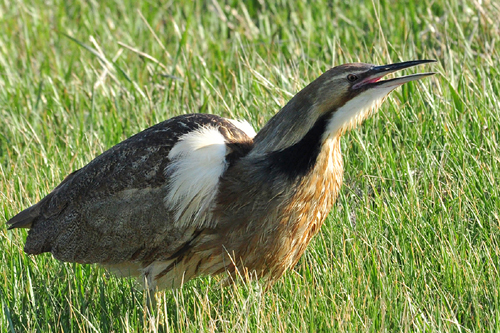 Characteristics and Range Like many marsh birds, the American Bittern is more often heard than seen. From late April, this heron's air-gulping, "pumping" call can be heard emanating from wetlands, particularly in the evening or at night. This bittern is a little over half the length of a Great Blue Heron with brown plumage marked with cryptic vermiculations and rufous stripes on the underparts. As with other bitterns, it can remain motionless with head pointed skyward, relying on its superb camouflage and its ability to observe a potential threat by looking "under" its neck. The American Bittern is a widespread breeder in North America, from Great Slave Lake to Newfoundland and south to mid-U.S.A., with southward extensions in California, New Mexico, and the Atlantic Seaboard. It winters primarily from the Pacific Coast of southern British Columbia and the Atlantic coast of New England south to southern U.S.A., Mexico, and parts of Middle America (Lowther et al. 2009).

Distribution, Abundance, and Habitat American Bitterns were found throughout the province except the extreme north (probable breeding in two squares along the Caribou River were the northernmost detections). This is similar to the range depicted in The Birds of Manitoba but with a notable absence of detections, in the western Taiga Shield & Hudson Plains, extreme eastern Manitoba, and the agriculturally dominated Red River valley south and west of Winnipeg. This bittern probably dœs nest in these areas, perhaps in low abundance; however, a sharp decrease in calling frequency after spring territoriality and mate attraction makes this cryptic species elusive, especially in remote areas surveyed in summer only. The percentage of squares with detections was highest in the Prairie Potholes (45% of squares surveyed), and lowest in the Boreal Softwood Shield and Taiga Shield & Hudson Plains. Relative abundance was highest around Lake Manitoba and the central Interlake, as well as in the southwestern Prairie Potholes, with moderate abundance along the Hudson Bay coast and generally low abundance in the intervening central boreal biome, with a few exceptions such as the Saskatchewan River delta. The relatively high computed abundance east of Cape Tatnum is probably exaggerated as there are few records there. Probability of observation follows a similar pattern but, as expected, is nowhere high. In Manitoba, American Bitterns are found in shallow freshwater marshes or at edges of lakes or ponds with tall vegetation, made up of cattails, Phragmites, sedges, willows, and similar plants.

Trends, Conservation, and Recommendations Long-term BBS trends suggest relative population stability in Manitoba and Canada; however, this stems from decreases in the 1970s and subsequent increases. The recent increasing trend, at least in Manitoba, is likely associated with the wet cycle of the late 1990s and early 2000s (Government of Canada 2014a). It has been postulated that wetland loss and degradation in the U.S.A. may be driving the population northward (Lowther et al. 2009). Though this species experiences a variety of threats, wetland loss remains the greatest among them (Lowther et al. 2009), perhaps particularly prevalent in the Prairie Potholes. For example, a recent analysis suggested this bittern had lost 52% of its population over 40 years in this BCR as a whole (Wilson 2014). This is one of many species that would thus benefit from a comprehensive wetland conservation strategy.