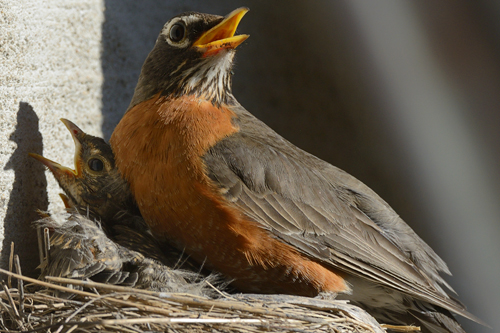 Characteristics and Range Few birds are as familiar to the Canadian public as the American Robin. The rufous underparts, contrasting with brownish-grey upper parts and dark head, is unmistakable. The shade of rufous varies with age and gender; breeding males have the richest coloration, while juveniles are heavily speckled. The song, a steady series of melodious phrases, provides a good starting point for learning birdsong.

An unusually wide-ranging songbird, the American Robin breeds throughout Canada and the U.S.A., except parts of the far north and extreme south, and extends well into Mexico at moderate elevations (Vanderhoff et al. 2016). Within this huge range, BBS data indicate abundance peaks in the U.S. Midwest, the Pacific Northwest, and Atlantic Canada. The winter range extends from milder regions of southern Canada and coastal Alaska through most of the conterminous U.S.A. to central Mexico. Small numbers regularly attempt to overwinter in extreme southern Manitoba, often succeeding if wild or cultivated fruit is abundant and cold snaps are not prolonged.

Distribution, Abundance, and Habitat The American Robin breeds throughout Manitoba with uniformly high probability of observation, diminishing somewhat along the Hudson Bay coast. Of all the species detected during atlas fieldwork, it ranked highest in number of squares (2,258) and second highest in number of point counts (10,350) where it was detected. Computed abundance is fairly uniform, but with elevated numbers in the southern Interlake and in Riding Mountain National Park. High abundance is also indicated in a large tract of northwestern Manitoba, mostly within the Taiga Shield & Hudson Plains, from just north of Split Lake to the Saskatchewan border region northwest of Reindeer Lake; however, much of this area was sparsely surveyed. As with probability of observation, abundance is reduced in the immediate coastal region, especially the Cape Churchill area. A decline of detection rates from almost 100% of squares in the Boreal Hardwood Transition and Prairie Potholes to around 60% in the Boreal Softwood Shield and Taiga Shield & Hudson Plains at least partially reflects lower survey effort in the latter, more remote regions.

Though best known as a garden bird, the American Robin is at home in a wide variety of habitats from human-dominated landscapes, both urban and rural, to wilder lands of almost every description up to and even beyond the treeline. The common thread is presumably an adequate supply of soft invertebrate prey, such as earthworms, combined with trees, shrubs, or ledges for nesting (conifers being preferred for spring nests). Fruit availability becomes important in late summer, fall, and especially in winter. Present from early spring to late fall, American Robins can raise two or occasionally three broods. An intriguing phenomenon is the late-summer departure of most robins from southern Manitoba, followed by a fall flood of migrants presumably from the north.