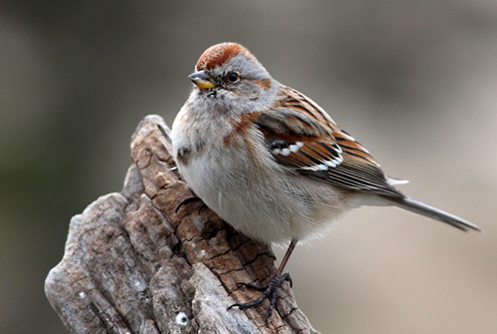 Characteristics and Range Poorly named for its superficial resemblance to the Eurasian Tree Sparrow rather than for any affinity to treed habitats, the American Tree Sparrow is the only member of its newly erected genus. It is physically similar to Spizella sparrows such as the Field Sparrow, but vocally similar to its close relative the Fox Sparrow (Slager and Klicka 2014). It breeds at and beyond the northern treeline from Labrador to Alaska and winters in open grassy and shrubby habitats from southern Canada to the Texas Panhandle, including infrequently in southwestern Manitoba and rarely in other agricultural parts of the province (Naugler 2014).

Distribution, Abundance, and Habitat As described in The Birds of Manitoba, the American Tree Sparrow was found breeding across Manitoba's north, mostly within the Taiga Shield & Hudson Plains (found in 57% of squares with ≥3 hours of effort) and the Arctic Plains & Mountains (93%). Possible breeding records in six squares across a large region from Lynn Lake to Gillam suggest that the southern range limit extends farther south into the Boreal Softwood Shield, at least locally. Relative abundance was generally high along the treeline-tundra transition, although there was also some high abundance ~100 km inland from the coast. The probability of observation was highest in a band approximately 100 km wide along the coast and decreased gradually inland and southward. This is consistent with the species' preference for shrubby habitats with just a few trees (used as song perches) or stunted forests such as black spruce bogs—habitat types that are often found in proximity to lakes and ponds (Naugler 2014). Although there appear to be few differences within the Manitoba breeding range, there may be a greater rate of detection, both by sight and sound, in the most open habitat types.

Trends, Conservation, and Recommendations This species is too northerly to be well surveyed by the BBS and there is no significant trend for Canada.  Partners in Flight considers it to be a "common bird in steep decline", estimating that it may have declined by 53% since the 1970s based on CBC and other data (Rosenburg et al. 2016). Further monitoring is warranted to assess whether these perceived declines are actual and how this species responds to climate change.