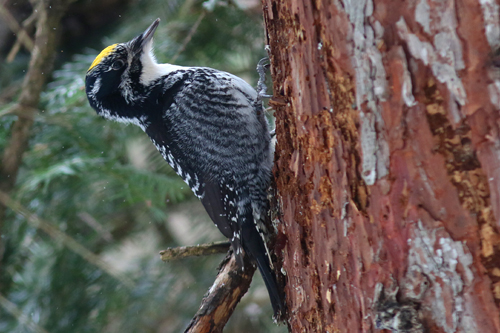 Distribution, Abundance, and Habitat Atlas results show the distribution of the American Three-toed Woodpecker, as illustrated in The Birds of Manitoba, to be throughout the boreal biome, but absent from the Prairie Potholes and the extreme northeast (above treeline). Considered an uncommon species, calculated relative abundance was generally lower than for other woodpeckers and peaked in the Boreal Softwood Shield and northernmost Boreal Taiga Plains. The moderately high abundance and probability of observation in the eastern Taiga Shield & Hudson Plains appear to be artifacts of limited coverage in the extreme northeast.

The predominantly boreal distribution of the American Three-toed Woodpecker is due to its strong association with coniferous and mixed forests, coupled with its specialization in exploiting the larvae of bark beetles and wood-boring insects such as longhorn beetles in dead trees, though sap from living trees is also a small part of the diet (Tremblay et al. 2018). This specialization can lead to dramatic short-term local fluctuations after disturbances such as tree-disease outbreaks and forest fires, which makes relative abundance difficult to interpret. Large forest fires in the latter years of the atlas and the jack pine budworm outbreak that began in 2015 (Government of Manitoba 2018) may have created a post-atlas increase, but no indications of unusually high numbers were recorded during the atlas period.

Trends, Conservation, and Recommendations BBS data suggest long-term stability in Manitoba and an increasing trend in Canada; however, the northern portion of the American Three-toed Woodpecker's range is poorly covered by the BBS and the reliability of these trends is low. This species' ecological specialization as discussed above and its large home-range size make it vulnerable to clear-cutting harvest practices that remove and fragment habitat, especially old-growth forest (Tremblay et al. 2018). More research is needed on how this woodpecker is affected by forestry and what management practices might be most suitable, along with better monitoring in the northern portions of its range.