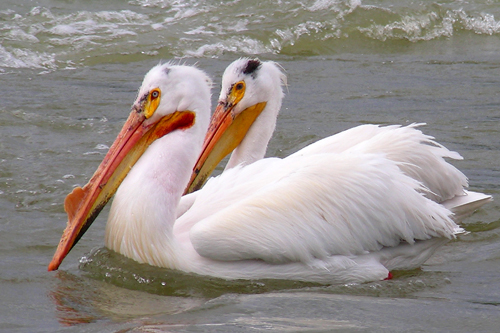 Characteristics and Range The massive American White Pelican has the largest wingspan of Canadian birds and needs little introduction thanks to its distinctive beak and white plumage (with black on the wings). It nests from British Columbia east to Lake of the Woods and Lake Nipigon, Ontario (Peck 2007), the continental divide creating two migratory populations (Knopf and Evans, 2004). Manitoba holds half of Canada's nesting American White Pelicans and one third of the global breeding population (Kuntz and Rakowski 1985). Non-migratory birds breed in Texas and Mexico. Winter distribution is limited to areas with a minimum January temperature of 4oC (Knopf and Evans 2004), and includes the Pacific coast from California to Nicaragua, and the Atlantic coast as far south to the Yucatįn Peninsula (Knopf and Evans 2004).

Distribution, Abundance, and Habitat Although seen in many parts of Manitoba (including in cities), nesting colonies are concentrated in Manitoba's three great lakes - Lakes Winnipeg, Manitoba, and Winnipegosis, as noted in the The Birds of Manitoba. Confirmed breeding at Gauer Lake shows that nesting occurs at least 150 km north of the range depicted in that publication. Breeding was also confirmed in somewhat smaller lakes in the Interlake, southern Manitoba ( Turtle Mountain Provincial Park), and eastern Manitoba (Stevenson Lake). Nesting on the ground, this species breeds in large colonies on remote islands (Knopf and Evans 2004). It forages up to 100 km from the nesting island, along rivers, lake edges, and marshes (Knopf and Evans 2004, The Birds of Manitoba) and, therefore, some possible breeding records likely pertain to long-distance commuting birds. For example, no breeding colonies were detected during targeted surveys in lakes north of The Pas, although adults were observed (Wilson 2013). Aerial surveys during the atlas period estimated that a total of 12,680 pairs were breeding on Lakes Winnipeg (7,849 pairs in 9 colonies), Manitoba (1,048 pairs in 4 colonies), Winnipegosis (2,881 pairs in 4 colonies), and Kaweenakumik Lake (902 pairs), with the largest colonies around Reindeer Island on Lake Winnipeg (2,846 pairs) and in the North Winnipegosis Reefs IBA (2,373 pairs) (Wilson et al. 2014). Water levels influence breeding success, pelicans needing to find suitable areas one metre above water level (Knopf and Evans 2004), and former colonies at the Shoal Lakes, Lake St. Martin, and Dog Lake all suffered abnormally high water levels during the atlas period. However, aerial surveys in 2017 found that pelicans had returned to nest in Dog Lake (2,789 pairs) as well as on a newly created island where there was once a continuous strip of land between East and West Shoal Lakes (3,509 pairs) (A. McKellar, unpubl. data). Also noteworthy is a colony at Devil Island (1,479 pairs), found in 2017 (A. McKellar, unpubl. data).

Trends, Conservation, and Recommendations Following long-term historical declines, attributed to the impacts of DDT, unregulated hunting for the feather trade, and disturbance of nesting colonies, the American White Pelican population has increased significantly since the 1970s (Knopf and Evans 2004). Comparative surveys in Manitoba suggests a strong annual increase from 1969 (4,449 pairs) (Vermeer, 1970) to 1979 (10,501 pairs) (Koonz and Rakowski 1985), and then a slower increase to 2012 (12,680) (Wilson et al. 2014). The prevention of disturbance at nesting colonies remains imperative for this species.