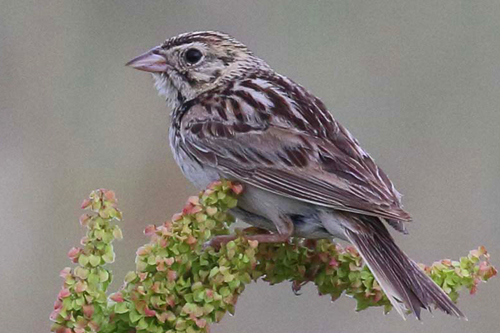 Characteristics and Range Baird's Sparrow is a grassland endemic of the Great Plains that is rarely found without knowing its distinctive song—a tinkling, musical zip-zip-zip-zrrrrr-eeee. Its secretive nature is illustrated by nearly 30 years elapsing between its description by Audubon in 1843 and "rediscovery" by Elliott Coues (Green et al. 2002). Baird's Sparrow has a small breeding distribution from southeastern Alberta and Montana to southwestern Manitoba and South Dakota. Its winter range is also small, extending from extreme southeastern Arizona to southwestern Texas and south into north-central Mexico (Green et al. 2002).

Distribution, Abundance, and Habitat Baird's Sparrow appears to be partially nomadic, often exhibiting dramatic shifts in distribution and abundance from one year to the next (Green et al. 2002). These shifts are believed to have evolved in response to fire, drought, and the unpredictable grazing patterns of bison herds. During extended drought cycles throughout much of its nesting range, the last of which occurred in the late 1980s, Baird's Sparrow generally expands in both abundance and range in Manitoba, even as far east as Winnipeg (De Smet 1992). Today, extensive habitat loss in south-central Manitoba, combined with a particularly wet past two decades, has resulted in it being largely restricted to a few selected nesting locales in extreme southwestern Manitoba (The Birds of Manitoba). During the atlas period, Baird's Sparrows were encountered in 18 squares in southwest Manitoba, all but three of them being south and west of Oak Lake. Nonetheless, 2015 saw a small but unexpected expansion with sightings north of the Trans-Canada Highway as far north as the Ellice-Archie community pasture near St-Lazare (C. Artuso, C. Cuthbert, K. De Smet, pers. obs.), and a similar pattern was noted in 2017.

In much of its nesting range, Baird's Sparrow is found in lush, ungrazed to moderately grazed tracts of native prairie with minimal shrub cover. In Manitoba, where native prairie is rare and vegetative conditions are generally lusher than elsewhere in its range, it is a regular inhabitant of pockets of dense vegetation including low-lying areas within extensively grazed pastures; it is sometimes found in tame grasslands or haylands, and will even occasionally occur in alfalfa fields and sparse croplands (Davis and Sealy 1998).

Trends, Conservation, and Recommendations Baird's Sparrow was historically encountered throughout the prairies of Manitoba. In the late 1800s, it was referred to as one of the most common birds in prairies west of the "Pembina Mountains" (Thompson [Seton] 1890). Conversion of much of the native prairie to cropland, fragmentation and degradation of suitable native-like grasslands, and proliferation of shrubs and woody vegetation due to fire suppression have greatly reduced populations. Baird's Sparrow is now declining throughout its range and is listed as Special Concern in Canada and Endangered in Manitoba. Its nomadic nature causes fluctuations in BBS results, making short-term regional trends difficult to determine, but long-term BBS declines range-wide exceed 2% per year (Sauer et al. 2015). While most breeding areas are privately owned, careful habitat management is usually required even on dedicated conservation lands.