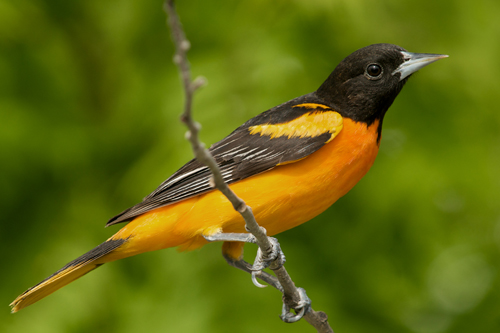 Characteristics and Range The Baltimore Oriole, with its striking black and orange plumage and clear, whistled song, is popular even among non-birders. Although named after the Baltimore family colours and not the east coast city, it is a mostly southeastern breeder in North America. Its characteristic hanging nest is found south of the boreal forest from Alberta to Nova Scotia, through the eastern Great Plains to northeastern Texas and eastwards, but absent from the southern Atlantic Coastal Plains and Florida (Rising and Flood 1998). Baltimore Orioles arrive in Manitoba in May from wintering grounds in southern Mexico, Central America, northern South America, the Caribbean, and Florida. Small numbers remain north of the regular winter range, rarely even into southern Canada, though with little survival success. Extreme western records can frequently be attributed to hybridization with Bullock's Oriole (Rising 1996).

Distribution, Abundance, and Habitat Atlas breeding evidence for the Baltimore Oriole provides an almost identical range to that estimated in The Birds of Manitoba. It is a common breeder in the Prairie Potholes and southern Boreal Taiga Plains, and a regular breeder in the Boreal Hardwood Transition. It becomes infrequent in the northwest Boreal Taiga Plains to The Pas. Relative abundance is highest on both sides of Lake Manitoba, at the southern end of Lake Winnipeg, and in the extreme southwest and the arc of Turtle Mountain. Away from these hotspots, abundance drops quite quickly, but with a stronghold from the Manitoba escarpment through the Red River valley. Probability of observation is similar with the addition of low probability as far north as Island Lake in the east, albeit supported by just two records near the Berens River. Scarce breeding evidence east of Lake Winnipeg, including nearby parts of western Ontario (Cadman 2007) show that this species is rare in the Boreal Softwood Shield. Baltimore Orioles strongly favour deciduous woodland edges and open areas with scattered deciduous trees. In Manitoba, nesting density can be tied to outbreaks of forest tent caterpillar (Sealy 1980).

Trends, Conservation, and Recommendations The Baltimore Oriole has benefited from forest clearing, shelter belts, and tree plantings in urban areas and suburban parks. This makes the significant population declines in Manitoba and across Canada particularly troubling. In Manitoba, long-term trends indicate >50% decline since 1970; short-term trends in the Prairie Potholes, representing much of its range, show >25% declines from 2005 to 2015 (BBS data). Once a conspicuous backyard breeder, it is noticeably infrequent or absent in some areas where it was formerly common including Pinawa (Taylor 1983). Because they build nests within days of arrival in May and later nests are more likely to fail (Rising and Flood 1998), Baltimore Orioles are sensitive to abnormally cold and/or wet springs, which are both more frequent as a result of climate change. Pesticide spraying during caterpillar outbreaks removes a source of food and might directly poison orioles (Rising and Flood 1998). Shade-grown coffee plantations are important habitats in winter; any changes in coffee farming practices should be monitored.