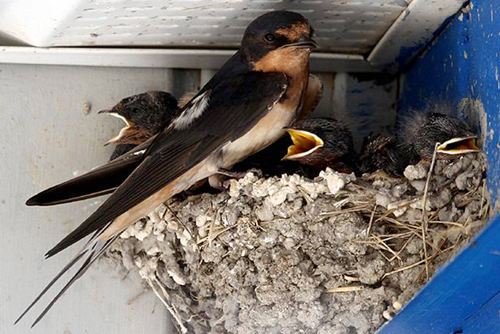 Characteristics and Range The most widely distributed swallow in the world, the Barn Swallow can be found on every continent except Antarctica, though only nesting in the Northern Hemisphere (with a recent exception in Argentina). This species is primarily distinguishable from other Manitoban swallows by its long, deeply forked 'swallow' tail. The North American subspecies nests continent-wide, from central Mexico north to southeastern Alaska and southern Newfoundland and is strongly associated with both open habitats and hardwood trees (Brown and Brown 1999). It nests in all Canadian provinces and territories (COSEWIC 2011b). North American breeders winter in central and western South America, most notably in lowlands, and even on the Galapagos Islands.

Distribution, Abundance, and Habitat The Barn Swallow is widespread in Manitoba, especially in the south and west of the province outside areas of undisturbed boreal forest. It favours open habitats, including farmland, wetlands, human settlements, roads, large forest clearings and cottage communities. Frequency of occurrence fits into a similar pattern: peak abundance is in the Prairie Potholes and remains relatively high in the Boreal Taiga Plains and the Boreal Hardwood Transition, with fewer observations in the Boreal Softwood Shield and the Taiga Shield & Hudson Plains. Relative abundance was highest in southwestern Manitoba, the Red River valley, and around southern Lake Manitoba. Although rarer in northern and central Manitoba, there are irregular localised patches of moderate abundance around larger settlements such as The Pas and Flin Flon. The probability of observations declines north and east of the Prairies Potholes and on the boreal (elevated) portions of the Manitoba Escarpment.

The Barn Swallow once nested in caves, tree cavities and rock crevices but has adapted to breed in anthropogenic structures, often under the roofs of old wooden buildings such as barns, under bridges, and in culverts (The Birds of Manitoba, Brown and Brown 1999). Unusual nesting sites noted by atlassers included a small pipe along the railway south of Churchill and a toilet-roll holder in a small outhouse at Bissett. Breeding habitat requirements include open areas for foraging, a suitable nesting location, and a body of water with access to mud, the primary nest-building material (Brown and Brown 1999).

Trends, Conservation, and Recommendations Formerly rare in Manitoba, the Barn Swallow expanded its range here considerably in the 19th century (The Birds of Manitoba). Nonetheless, BBS trends indicate significant declines both in Manitoba and elsewhere in Canada since the 1970s. Although the situation across the continent appears to be more nuanced, in Canada, the Barn Swallow was recommended as Threatened by COSEWIC in 2011 and added to the Species At Risk Act in 2017. The reasons for these long-term declines are poorly understood, but have been attributed to conversion or demolition of old agricultural buildings, loss of open foraging habitat following conversion of haylands and wetlands to crop production, large-scale declines in insect populations, direct and indirect mortality following cold snaps, parasites on nestlings, competition with the invasive House Sparrow, and exposure to pesticides on migratory and winter habitat (Brown and Brown 1999, COSEWIC 2011b). Long-term observers have recorded the disappearance of nesting Barn Swallows in Winnipeg suburbs over the past ~10 years, suggesting a possible link with urban mosquito fogging be investigated.