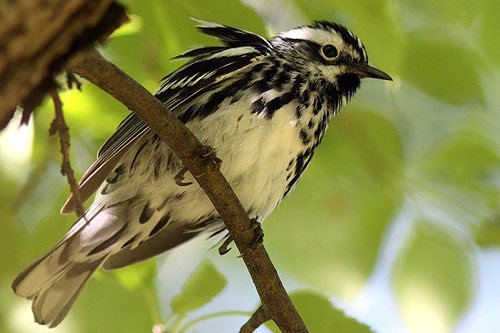 Characteristics and Range Known for its distinctive "nuthatch-like" behaviour and boldly striped plumage, the Black-and-white Warbler is a familiar bird of deciduous and mixed forests. This species breeds across the boreal forest and down the Appalachians as well as in other deciduous woodlands, including some parts of the coastal plain of eastern North America. It winters in a broad variety of habitats from the southeastern U.S.A. to northern South America and the Caribbean (Kricher 2014).

Distribution, Abundance, and Habitat The atlas documented the range of the Black-and-white Warbler as extending farther north than depicted in The Birds of Manitoba, especially along the Gods, Hayes, and Nelson Rivers. Its Manitoba range is similar in pattern to the overall breeding distribution, with a core population in the southern boreal forest, including transition zones, and lesser numbers in wooded areas of prairie and parkland and in parts of the central and northern boreal forest. Its distribution at the northern range limit (as with its southwestern range limit) is tied to the presence of deciduous trees, especially mature forest types such as riparian corridors but also strips of deciduous trees along roads in otherwise coniferous forest.

Peak abundance of this species follows the boreal-parkland transition, as expected by its use of tall deciduous trees and mixed-woods, rather than being strongly associated with any one BCR; however, the highest abundances and probability of observation were recorded in the Boreal Hardwood Transition. In western Manitoba, the slopes of the Manitoba Escarpment, especially Riding Mountain and the Duck Mountains, showed the highest abundance, with slightly lower abundances along the Arden Ridge and in the Porcupine Hills. Abundance and probability of observation diminished toward the northern range periphery and, to a lesser extent, in the Prairie Potholes, where preferred habitats are less common.

Trends, Conservation, and Recommendations BBS results suggest this species is increasing in Manitoba, despite the lack of a trend in Canada as a whole. Local declines in some parts of the range have been linked to pesticide usage (Kricher 2014). Since it is predominantly a ground nester that prefers mature forests, sometimes being described as a forest-interior species, the Black-and-white Warbler could suffer from habitat fragmentation in the future (Kricher 2014). Nevertheless, it can benefit from some habitat disturbance; for example, it is attracted to strips where poplars have colonized disturbed areas along road developments in coniferous forest, although the possibility of ecological traps (population sinks) in such linear habitats exists. It may also benefit from increasing colonization by poplars in the Prairie Potholes.