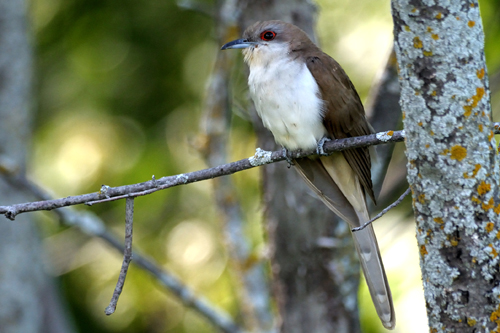 Characteristics and Range Reclusive in nature, the Black-billed Cuckoo's repetitive coo-coo-coo is often the only sign of its presence. It is similar in size and colouration to the Mourning Dove, though it has white underparts, bare red skin around the eye, a slightly curved bill, and a long graduated tail. Unlike the Old World cuckoos, which are famed as obligate brood parasites, the Black-billed Cuckoo infrequently parasitizes other nests. It nests from the eastern edge of the Rocky Mountains to the Atlantic coast and from the southern boreal forest to Oklahoma and North Carolina. It winters primarily in the northern Andes (Hughes 2001).

Distribution, Abundance, and Habitat The Black-billed Cuckoo was found nesting across southern Manitoba as far north as a curve from Bissett to Limestone Bay and across to The Pas, much as estimated in The Birds of Manitoba. The highest abundance values were in the boreal-parkland transition, especially the southern Interlake and around the southern shores of Lake Manitoba and Lake Winnipeg. Of the 19 squares where the mean abundance exceeded 0.5 birds per point count, 74% were in the southern Interlake (Region 6). This agrees with BBS analyses showing Manitoba as having the highest abundance of Black-billed Cuckoos in North America, peaking in the southern Interlake (Hughes 2001, Sauer et al. 2015). From this core range, the relative abundance decreased northward in the boreal biome. In terms of the percentage of occupied squares, the Boreal Hardwood Transition had the highest detection rate (61% of surveyed squares), which was halved (29%) in the Boreal Taiga Plains, consistent with patchy occupancy near the northern range limit. Abundance was lower in the agriculturally dominated areas of the Prairie Potholes, such as the Red River valley, but remained relatively high within wooded areas such as forested valleys, sandhills, and the slopes of the Manitoba Escarpment. This pattern fits this cuckoo's general preference for deciduous woodlands with a dense understorey, most characteristic of the boreal-parkland transition; however, mixed woods, forest edge, riparian corridors, willow and other shrubland, regenerating forests, shelterbelts, and small clusters of trees in grassland are all suitable nesting habitats.

Black-billed Cuckoo breeding is correlated with food resources, especially the availability of the eastern tent caterpillar (Hughes 2001). This trait is linked to its late spring return, and to its relatively late and somewhat variable nesting period (as well as to an extraordinary ability to cough up its stomach lining when overburdened with caterpillar bristles). The average in 2012 of 0.09 birds per point count was more than double that of any other year (0.02 in the two years preceding and 0.04 in the two years following). This suggests fluctuations in abundance but no strong link to forest tent caterpillar outbreaks during the atlas period.

Trends, Conservation, and Recommendations Historical evidence suggests that the Black-billed Cuckoo has declined from high numbers in the 19th century, when observers described flocks of cuckoos descending upon caterpillar-laden trees (Hughes 2001). BBS data show overall stability in Manitoba and Canada since the 1970s, despite short-term fluctuations. Pesticides have a negative effect on this cuckoo, both in terms of reduced food availability and by poisoning (Hughes 2001). As such, improved understanding of population regulation in this species would be informative for environmental monitoring.