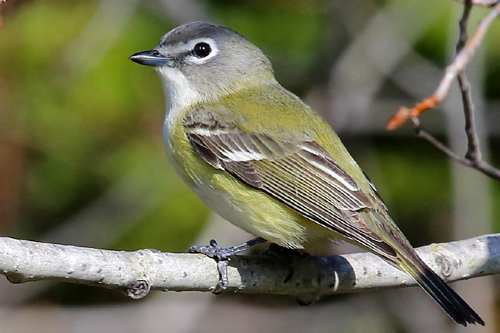 Characteristics and Range With its conspicuous white "spectacles" offset against a steel blue face, this attractive vireo is easily identified and commonly seen during migration. Nonetheless, the Blue-headed Vireo is the most boreal of Manitoba's vireos and not readily observed on its breeding grounds. It breeds across the boreal forest and through the Appalachians, wintering from the southeastern U.S.A. to Central American forests.

Distribution, Abundance, and Habitat The Blue-headed Vireo is typically found in jack pine or black spruce. Its distribution as documented by the atlas differs little from that depicted in The Birds of Manitoba except for adding (a) the Spruce Woods area, where detections in three squares suggest local breeding in this boreal island, and (b) slightly closer proximity to York Factory in the northeast. Relative abundances are highest in the Boreal Softwood Shield, followed by the Boreal Taiga Plains and the Boreal Hardwood Transition. Nonetheless, this species was detected in a greater proportion of sampled squares in the Boreal Hardwood Transition, perhaps because multiple visits and early-season atlassing increased detections. This may influence results because this species is most vocal early in the general atlassing period and singing frequency declines by >50% after pairs are mated (Morton and James 2014). A further complicating factor is that the Blue-headed Vireo is seldom found close to roads in Manitoba, despite the fact that its song has remarkable carrying power, and the relative portion of off-road to roadside point counts (and the distance to nearest road of any off-road counts) should be considered. The Blue-headed Vireo was not found breeding near the treeline and is limited to the southernmost portion of the Taiga Shield & Hudson Plains. Breeding distribution in the Prairie Potholes is limited to a few pockets of coniferous habitat.

Trends, Conservation, and Recommendations The Blue-headed Vireo is generally increasing in North America, perhaps due to regeneration of formerly cleared forests, but BBS data show no significant trend in Manitoba. Given its preference for large forest tracts (Morton and James 2014), monitoring is necessary to determine if road development, logging, fire suppression or other activities in the boreal forest will have an impact.