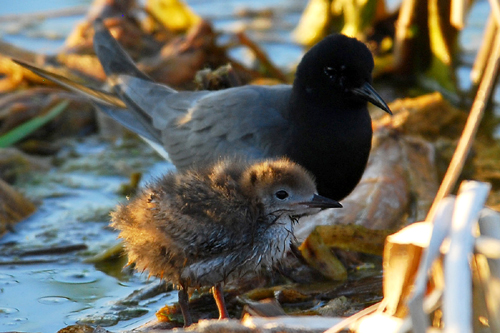 Characteristics and Range Manitoba's smallest tern dœs not only differ in size from other North American terns, it is also differently coloured. It is largely sooty black with grey wings and white undertail-coverts during the breeding season. It is extremely buoyant on the wing, darting and hovering over the water's surface while looking for prey, which consists of invertebrates and small fish. Black Terns nest in North America, parts of Europe and westernmost Asia, and a tiny area in North Africa. The North American range is from the Northwest Territories south to California and Colorado and east to Quťbec and locally in the Maritimes. North American populations winter at sea from Mexico to northern South America (Heath et al. 2009).

Distribution, Abundance, and Habitat Black Terns were widespread in the southern half of Manitoba and particularly abundant in the southwest (south of Riding Mountain National Park and other areas west of the Manitoba Escarpment), around Lake Manitoba and Dauphin Lake, and in wetlands around The Pas. Relative abundance and probability of observation were highest in the southwest and west of Lake Manitoba. The species was present in 58% of squares in the Prairie Potholes, with percentages declining to the north and east. These numbers may be somewhat inflated, as Black Terns can range up to 5 km from the nest to forage, although typically within 500 m (Heath et al. 2009). The observed distribution was somewhat less extensive in the north than shown in The Birds of Manitoba and disappearance from some former northern and eastern breeding localities was noted (P. Taylor, pers. comm.). This may be a product of extensive habitat availability and high densities of birds in the core breeding range in the western Prairie Potholes during the wet atlas period. Black Terns nest semi-colonially in emergent vegetation in food-rich freshwater wetlands. They frequently re-nest and show little site tenacity, adapting to changing marsh conditions and making use of ephemeral wetlands, many of which held open water and were surrounded with lush vegetation in all five years of the atlas.

Trends, Conservation, and Recommendations BBS data show a decline since the 1970s in Manitoba (and the Prairie Province overall) but apparent stability in Canada. Short-term trends are not statistically significant however, suggesting a reversal of declines, presumably because of expansion during the past two decades of wetter-than-average conditions in Manitoba. There are numerous potential threats on the breeding grounds, such as loss and deterioration of freshwater nesting habitat, fluctuating water levels when nesting, reduction of food due to eutrophication of surface waters, acidification of lakes and pesticide pollution (Birdlife International 2016). Identifying and preserving critical wetland complexes for conservation is recommended.