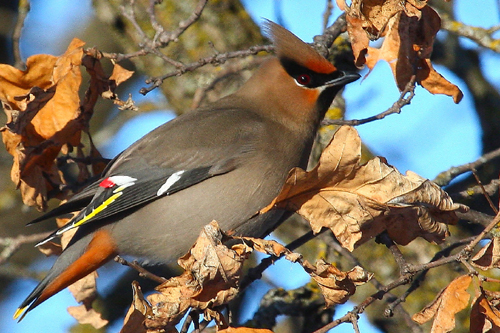 Characteristics and Range The Bohemian Waxwing is the larger and more northern counterpart of the Cedar Waxwing and readily distinguished from that species by its cinnamon undertail coverts. It breeds across the Holarctic from ~50 to 70°N; in North America from the southern Hudson Bay (and locally eastward in Ontario and Québec) west to Alaska, and in the Rocky Mountains south to southern British Columbia.  It winters across southern Canada and Alaska, south to California in the west and Maryland in the east, but is scarce south of the Great Lakes. The breeding range partly overlaps with that of the Cedar Waxwing in northern Manitoba (co-occurred in 24 squares) and in the Rocky Mountains, and their winter ranges also overlap slightly in southern Manitoba and the northern conterminous U.S.A.

Distribution, Abundance, and Habitat The atlas effort recorded Bohemian Waxwings breeding from the Thompson area northward, except the region east of Nueltin Lake and north of the Seal River. There were nonetheless many well-surveyed squares with no detections in the southern portion of this range (northern Boreal Softwood Shield). Relative abundance and probability of observation both suggest a higher likelihood of detection in the province's northwest, decreasing eastward (especially east of the Nelson River) and southward into the northern Boreal Softwood Shield. The relative-abundance analysis suggests higher abundance along watercourses, as has been noted as a habitat preference (Witmer 2002), but this could also reflect the concentration of northern survey effort along navigable rivers. Detection rates on point counts were low (never averaging higher than 1.5 birds per point count in any square and rarely above 0.5) and patchy, possibly because nesting typically occurs near concentrations of fruit (Witmer 2002) and because this species is inconspicuous on the breeding grounds and easily overlooked. Breeding was confirmed in only four squares, all in the northwest. In addition to proximity to water, which presumably increases access to emerging insects, the Bohemian Waxwing favours relatively open areas of northern boreal forest, often with black spruce or birch and fruit-bearing trees, shrubs, or ground cover, as well as recently burned areas (Witmer 2002).

Trends, Conservation, and Recommendations The mid-1970s saw an increase in numbers of Bohemian Waxwings, presumably due to the banning of DDT and increased planting of ornamental fruit trees in their winter range (Witmer 2002). BBS data suggest a slight decline since 1970 in Canada, although surveys within the species' range east of the Rocky Mountains are too few to estimate a trend. The estimate of 55% population loss from 1970 to 2014 by Rosenburg et al. (2016) must be interpreted with great caution, especially given the poorly understood degree of nomadism in this species (Brewer et al. 2006) and considerable fluctuations on the CBC. The Bohemian Waxwing is vulnerable to pesticides and to window collisions where fruiting trees occur close to buildings (Witmer 2002).