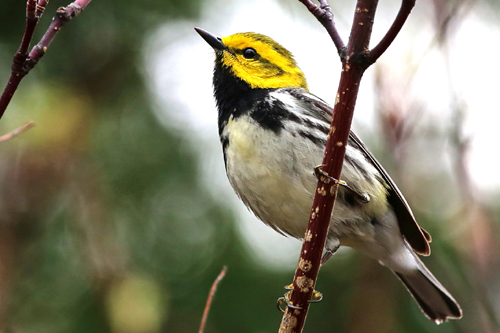 Characteristics and Range The two melodic, buzzy songs of the Black-throated Green Warbler make it one of the easier warblers to identify by ear. It is the only wood-warbler in Manitoba that has a yellow face, dull greenish ear patch and bright olive green back. It nests in boreal forest from Newfoundland and the east coast to eastern British Columbia, south through the Boreal Hardwood Transition around the Great Lakes and along the Appalachian Mountains, with a small coastal breeding area in Virginia and the Carolinas (Morse and Poole 2005). It winters in parts of Central America, a few of the Caribbean Islands, and the northern tip of South America (Morse and Poole 2005).

Distribution, Abundance, and Habitat Atlas results documented the range of the Black-throated Green Warbler almost exactly as depicted in The Birds of Manitoba but with an exceptional northern record near Leaf Rapids, which was the only record in the western Boreal Softwood Shield. The greatest frequency of detection was in the Boreal Hardwood Transition (found in 42% of squares), and the percentage of occupied squares decreased northwest from this BCR. Nonetheless, there were several areas of high relative abundance in the southeast corner of Manitoba, around the shores of Lake Winnipeg, and the boreal portions of the Manitoba Escarpment, especially the Duck Mountains and the Porcupine Hills. The Black-throated Green Warbler nests in coniferous and mixed-woods (Morse and Poole 2005). In eastern Manitoba, such as in the Pinawa area, Black-throated Green Warblers start to occupy second-growth forests that are transitioning from poplar to conifer domination once balsam firs reach canopy height (P. Taylor, pers. obs). In Saskatchewan, a preference for balsam fir and white spruce, but an absence from black spruce and jack pine, has been noted (Hobson and Bayne 2000). Since the former tree species often occur on well-drained sites, this may explain the higher abundances recorded around Lake Winnipeg and the Manitoba Escarpment.

Trends, Conservation, and Recommendations This Black-throated Green Warbler shows a long-term decline in Manitoba (albeit with low reliability) and in the western portion of its range (Sauer et al. 2015), but is stable in Canada (BBS data). It is a forest-interior bird and can disappear from sites that become fragmented even when the habitat remains largely unchanged (Morse and Poole 2005). Local declines may occur where coniferous trees are lost due to a variety of insect invaders or logging (Morse and Poole 2005). Development of forestry best management practices to mitigate such risks would benefit this and other forest-interior species.