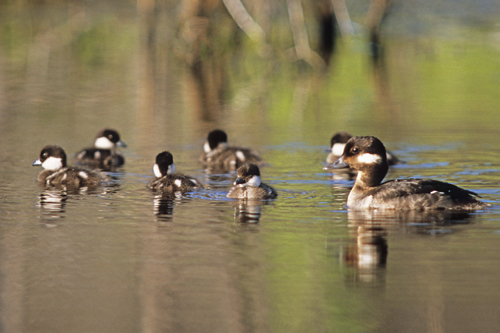 Characteristics and Range The teal-sized Bufflehead is North America's smallest diving duck, weighing less than half of its close relative - the Common Goldeneye. The breeding male's plumage has more white than black, including the back half of his head. Females are dark grey-brown above with grey flanks and small white ear and wing patches. The breeding range extends from Alaska across Canada to western Québec (albeit sparsely east of Manitoba) and southward locally into western U.S.A. (Gauthier 2014). A major zone of high breeding abundance is centred on northern parts of Alberta and Saskatchewan, extending into western Manitoba. There is minimal overlap with the winter range, which is mostly coastal (from northern Mexico to the Aleutians and from the Gulf of Mexico to Newfoundland), but also extends across southern U.S.A. and parts of the Mexican interior (Gauthier 2014). Banding returns indicate that almost half of Alberta breeders winter on the Atlantic Coast, and sparser records for Manitoba-banded birds all show a southeastward migration pattern (Erskine 1971, Gauthier 2014).

Distribution, Abundance, and Habitat Atlas records extend essentially province-wide, but with a strong western bias. Computed probability of observation emphasizes the major features of the Manitoba Escarpment and, secondarily, a large region from the Saskatchewan River delta and the north end of Lake Winnipeg to Reindeer Lake and Southern Indian Lake. Scattered records throughout the Taiga Shield & Hudson Plains extend farther northwest than the range estimate in The Birds of Manitoba, but they do not include any confirmed breeding, contrasting with numerous confirmations in the northern Boreal Softwood Shield. Thus, the assessment of this species as an "uncommon visitor in the far north" (The Birds of Manitoba) seems justified. Similarly, Jehl (2004) described the Bufflehead as a "rare summer visitor" in the Churchill region, with suspicion but no confirmation of breeding. Some earlier breeding-range maps indicate a void, or occasional breeding at best, in extreme southeastern Manitoba. While regular breeding has now been confirmed in the Boreal Hardwood Transition, admittedly in small numbers (often at sewage lagoons, pers. obs.), there remains a void in the intensively farmed Red River valley.

The Bufflehead is primarily a forest and parkland breeder. Its small size allows it to nest in Northern Flicker cavities (though only those on the large side, Erskine 1971), which are not accessible to larger cavity-nesting ducks. However, the distribution and abundance of the Bufflehead and Northern Flicker do not correlate closely, emphasizing the importance of other factors, especially the availability of suitable ponds and small lakes for brood rearing.

Trends, Conservation, and Recommendations The Bufflehead evidently recovered well from overhunting during the 19th and early 20th centuries. BBS data, though limited to the southernmost portions of the continental range, show a strikingly uniform increasing trend. Other surveys, more fully representative of the population, show similarly robust increases (Baldassarre 2014, Gauthier 2014). Environmental contaminant levels in Buffleheads are generally low (Baldassarre 2014, Gauthier 2014). The main management concern is loss of breeding habitat by the clearance of aspen parkland for agriculture and from clear-cutting in the boreal forest. Continued vigilance and monitoring, and consideration of this species in forestry practices, are therefore recommended. Provision of nest boxes, with careful attention to size and location, can be beneficial (Gauthier 2014).