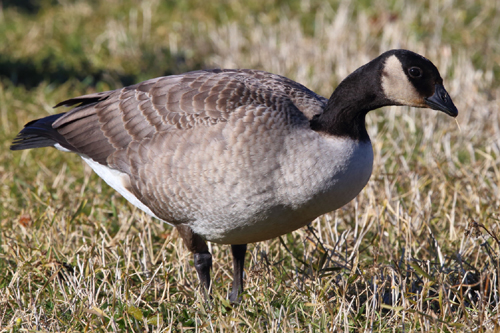 Characteristics and Range The Cackling Goose looks much like a small version of the Canada Goose. Indeed, until recently it was considered part of the Canada Goose complex and species status was only accepted by the American Ornithological Society in 2004. Complicating matters further, there is size overlap between the larger subspecies of Cackling Goose and the smallest Canada Geese, and hybridization between the two, making identification difficult. The bill of the Cackling Goose is short and stubby and its voice is relatively high-pitched and squeaky (Sibley 2007). Cackling Geese seen in Manitoba are predominantly the nominate subspecies, which breeds in the central Canadian Arctic and winters near the Gulf of Mexico in Texas and northern Mexico. The overall range of the species stretches from Alaska across the High Arctic to Labrador and Baffin Island. Although pure flocks occur in migration, Cackling Geese often mingle with Canada Geese, which can allow for side-by-side comparison.

Distribution, Abundance, and Habitat Although a hybrid zone between the Cackling Goose and the Canada Goose exists in northern Manitoba (Leafloor et al. 2013), measurements of adults and goslings have confirmed that some "pure" Cackling Geese breed in La Pérouse Bay (F. Baldwin, pers. comm.). During the atlas period, possible breeding was noted in the Wapusk National Park region, located in the Taiga Shield & Hudson Plains. The only confirmed breeding took place in extreme southwestern Manitoba, at the Wang Ducks Unlimited project, where wild Cackling Geese were attracted by captive birds and remained to breed, returning year after year until 2014. This location is about 1,500 km south of the normal breeding range. Numbers province-wide are too small to comment on abundance. Normal breeding habitat is located in the tundra and consists of coastal marshes, edges of ponds and streams, and slopes above rocky shores. Croplands and marshes are used during migration.

Trends, Conservation, and Recommendations Potential breeding habitat in Manitoba appears to be currently secure, although habitat degradation in the La Pérouse Baycolony (Klima and Jehl 2012) and increased shrub growth due to isostatic rebound and/or climate change (Ballantyne and Nol 2015) may have long-term impacts.