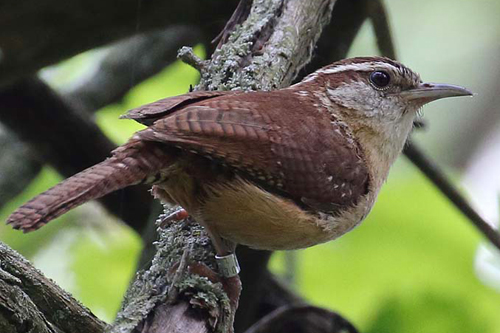 Characteristics and Range Rusty above and reddish buff below, with a bold, white supercilium, the Carolina Wren is markedly larger and heavier than any of the regularly occurring Manitoba wrens. Though the species is non-migratory, it is prone to wander and has a history of northward and westward range expansion (Haggerty and Morton 2014). The breeding range includes much of the eastern U.S.A., excluding northern New England but extending into southernmost Ontario. The western range limit runs from southeastern Minnesota (occasionally) and southeastern Iowa through eastern Texas to northeastern Mexico.

Distribution, Abundance, and Habitat Inclusion in the atlas is based on two well-separated singing Carolina Wrens found in Winnipeg in July, 2012, but there was no indication of either mates or nesting activity. Carolina Wrens have been found in southern Manitoba on ~25 occasions, mostly between August and December, suggestive of long-range post-fledging dispersal. Records extend north to Dauphin and Victoria Beach, and east to Pinawa. There have been three May sightings, plus an unconfirmed nest report in Winnipeg in 1936 (The Birds of Manitoba).

Trends, Conservation, and Recommendations While the frequency of records has increased since 1990, there is no realistic prospect of this species becoming established in Manitoba in the foreseeable future, given its susceptibility to decimation in severe winters (Haggerty and Morton 2014).