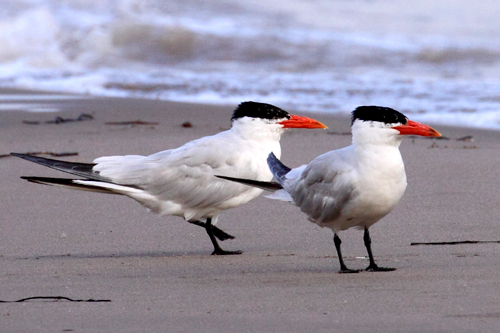 Characteristics and Range At about half a metre in length, the Caspian Tern is the largest tern in the world. It has a black crown, heavy red bill and notched tail. It has a wide range, breeding in colonies at scattered locations on all continents, except for Antarctica. In North America it breeds from Great Slave Lake south throughout much of the western U.S.A. and east through the Prairie Provinces and Great Lakes to Newfoundland. North American breeders winter from the southern U.S.A. to Middle America, mainly in coastal areas (Cuthbert and Wires 1999). Manitoba appears to have the largest nesting population in North America, although there is no estimate for the Northwest Territories (Cuthbert and Wires 1999). Gaston et al. (2008) discussed the possibility of a "migratory divide" between populations nesting in the Prairie Provinces and the Great Lakes (similar to the Ring-billed Gull), but there are few banding data points for Manitoba.

Distribution, Abundance, and Habitat The distribution of the Caspian Tern was very similar to that shown in The Birds of Manitoba, albeit with a considerable possible extension (or extension of knowledge) of ~400 km northward, to Lac Brochet and other outlying single records at Reindeer Lake, Tadoule Lake, and Kasmere Lake (though these could pertain to non-breeding individuals). Most observations took place around Lakes Winnipeg, Winnipegosis, and Manitoba, extending north to the Cedar Lake and Flin Flon region, with small clusters in southern Whiteshell Provincial Park and at the Shoal Lakes in the southern Interlake. Abundance was difficult to ascertain, due to the inaccessibility of breeding colonies and the resulting lack of point count data. However, aerial surveys in mid-June 2012 revealed about 3,200 breeding pairs at 14 colonies, evenly divided between Lakes Winnipeg and Winnipegosis, with one colony at Lake Manitoba. Median colony size was 198 pairs (range 1 - 782 pairs). Some other lakes with known colonies were not surveyed (Wilson et al. 2014.). Probability of observation was similarly highest along the shores of the above lakes. Caspian Terns in Manitoba breed colonially on sandy reefs and shores at large fresh-water lakes, in loose association with American White Pelican, Double-crested Cormorant, Ring-billed Gull, Herring Gull, and Common Tern.

Trends, Conservation, and Recommendations Although the species has seen an overall increase in North America since the 1970s (Cuthbert and Wires 1999), there has been an apparent decline in Manitoba since the 1990s. In the early 1990s an estimated 9,000 - 10,000 pairs were present, whereas the estimate for 2012 was only 3,207 pairs, although shifting distribution following water-level changes may account for some of these differences (Wilson et al. 2014). Persecution from fishermen is a threat, as the species is sometimes perceived as damaging to fish stocks. Caspian Terns will readily desert colonies when disturbed early in the breeding season. Flooding of colonies during high-water years and eutrophication, particularly on Lake Winnipeg, are other potential threats. Possible threats outside the breeding season are unclear. Regular monitoring of colonial waterbirds, including Caspian Terns, and avoiding disturbances of colonies are recommended.