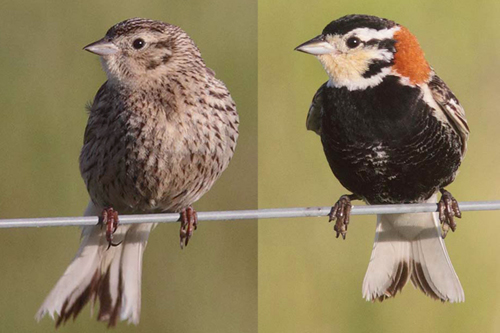 Characteristics and Range In contrast to the brown, sparrow-like appearance of female longspurs, the breeding male Chestnut-collared Longspur has a distinctive chestnut nape, a black-and-white striped face, creamy yellow throat, and jet black underparts. The white outer tail feathers are most obvious when males launch into low display flights with a flight song similar to a distant Western Meadowlark. The Chestnut-collared Longspur nests primarily in the northern Great Plains (including Manitoba) and winters in short-grass prairie and desert grasslands from Kansas to Arizona and south into northern Mexico.

Distribution, Abundance, and Habitat  Chestnut-collared Longspurs formerly occurred east to Winnipeg and the southern Interlake and were locally common there until the 1980s (Cleveland et al. 1988). Ongoing loss of grasslands has doubtless impacted this species, and wetter than normal conditions in southern Manitoba since the early 1990s have resulted in vegetation becoming too dense and overgrown in many former nesting areas. As a result, this longspur is now restricted to a handful of remnant prairies and well-grazed pasturelands mostly south and west of Carberry (The Birds of Manitoba). All but one of the 36 squares where it was observed during the atlas period were in the southwest; the lone exception being near Rock Lake. Even in the southwest, this species was found on less than 1% of all point counts. Much as indicated in The Birds of Manitoba, important strongholds include short mixed-grass prairies and pasturelands in the Shilo Plains, extensive pasturelands associated with the Assiniboine River north to St-Lazare, and selected areas in the Southwest Mixed-grass Prairie IBA including remnant pastures in the Lyleton-Pierson area, the Souris and Blind Souris valleys south of Melita, and the Poverty Plains from Pierson to Broomhill.

The Chestnut-collared Longspur dœs not tolerate tall or dense grass, preferring well-grazed pastures and short, dry grasslands. It historically bred at sites disturbed by fire or grazed by bison (Bleho et al. 2015). Even today, it avoids idle grasslands or areas protected from grazing or other disturbances, and it is generally found in well-grazed pastures or (more rarely) sparsely vegetated native, or recently mowed, hayfields (Bleho et al. 2015, pers. obs.).

Trends, Conservation, and Recommendations The Chestnut-collared Longspur was once one of the most abundant birds on the prairies, but as the grasslands have dwindled, so has the longspur population. Today, it is listed as Threatened federally and Endangered in Manitoba. Due to its current highly localized and clumped distribution, BBS trends have low reliability and can change radically depending on the time period being examined. Nevertheless, steep long-term annual declines and range contraction have been documented range-wide and especially for Canada, suggesting that the species has declined by more than 87% since the mid-1960s (Sauer et al. 2015). Grazing management and prescribed burns are the most effective tools for restoring longspur nesting habitat (Dechant et al. 1998). In Manitoba and other relatively moist parts of its range, or during extended wet years, moderate to heavy grazing can be beneficial. Occasional mowing can also prevent shrub encroachment and decrease vegetation height and density.