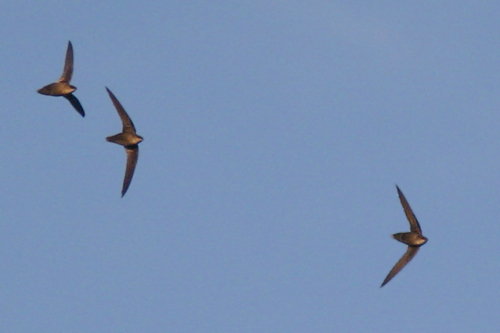 Characteristics and Range Often referred to as a "cigar on wings", the Chimney Swift's characteristic features include a stubby tail, narrow wings, jerky wing beats, and twittering calls. These birds are most noticeable during migration, when large numbers circle at dusk before descending rapidly into their roosting chimney. Chimney Swifts breed throughout deciduous-dominated habitats east of the Rocky Mountains from the subtropical forests of southeastern U.S.A. to the southern edge of the boreal forest (Steeves et al. 2014). Southern Manitoba and eastern Saskatchewan represent the northwestern periphery of the breeding range. Despite its broad association with woodlands, this species is now mostly reliant on human settlements where chimneys occur. The species winters in northwestern South America.

Distribution, Abundance, and Habitat In Manitoba, the Chimney Swift is mostly associated with suburbs and towns with pre-1960s construction, where open, unlined chimneys persist. Its distribution is hence patchy with the largest concentrations in or close to Winnipeg. Most atlas records broadly follow the boreal-parkland transition, with probable or confirmed breeding in Winnipeg, Selkirk, Steinbach, Portage la Prairie, Dauphin and Lac du Bonnet. Breeding was also confirmed in prairie towns south of this transition zone, viz. Brandon, Souris, Clearwater, and St. Jean Baptiste. Swifts were also detected north (The Pas and the Porcupine Hills) and southwest (Melita) of the range estimated in The Birds of Manitoba. Confirmed breeding in La Broquerie and probable breeding in Lac du Bonnet inform the distribution east of the Red River valley, where this species was thought to have become rare (The Birds of Manitoba). Since the completion of the atlas, there have been observations in St. François Xavier, Manitou, and Stonewall, and confirmed breeding in Melita, Carman, and Otterburne. Although there are recent records of nesting in natural cavities (Zanchetta et al. 2014), no evidence of this was found during the atlas period. Nonetheless, sightings in the Porcupine Hills, both in 2009 (C. Artuso) and during the atlas period, were not close to the few towns in the area. There was only one sighting on the eastern escarpment of Riding Mountain (near the Agassiz Ski Hill) where previous breeding in natural cavities was thought to occur (The Birds of Manitoba).

Trends, Conservation, and Recommendations The species continues to undergo precipitous declines according to BBS data. Loss of nest sites through the capping, lining, or demolition of chimneys had been identified as the primary threat, although recent evidence casts some doubt on this (Fitzgerald et al. 2014). Nonetheless, loss of chimneys in small towns represents a greater loss (in proportion to available habitat) than in urban areas and may have a greater impact. As with other aerial insectivores, the use of pesticides has been implicated as a major threat (Steeves et al. 2014). There is evidence that hatching and fledging rates are low in Manitoba and that severe summer rainfall events increase nest failures (Stewart and Stewart 2013). The Chimney Swift has benefited from dedicated monitoring, research, and stewardship through the Manitoba Chimney Swift Initiative (MCSI) since 2007. MCSI activities include retaining open chimneys through agreements with landowners, outreach, and education. Mitigation of accelerating habitat loss under the Manitoba Endangered Species and Ecosystems Act is helping to ensure a future for this species here.