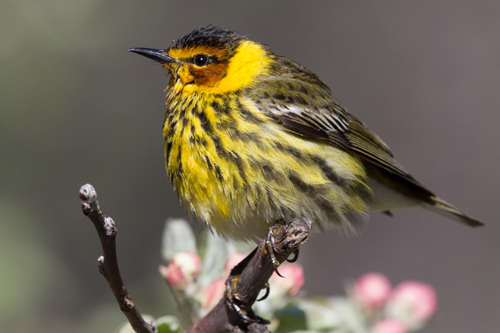 Characteristics and Range Extremely high-pitched songs and a preference to forage high in dense spruce trees can make this colourful wood-warbler difficult to detect. The breeding male's most distinctive features are a "tigrine" black-streaked yellow breast, bold white wing-patch, and chestnut ear-coverts outlined in yellow. Females have a muted, streaky appearance with diffuse yellow rump and neck patches. The Cape May Warbler breeds in a broad, boreal band from southern Northwest Territories and extreme eastern British Columbia to the Gulf of St. Lawrence, dipping southward around Lake Superior and into northern New England. It winters on Caribbean islands from the Bahamas and Florida Keys to the Virgin Islands, plus coastal portions of the Yucatįn peninsula and Central America (Baltz and Latta 1998).

Distribution, Abundance, and Habitat Most atlas records lie within the previously estimated range (Baltz and Latta 1998, The Birds of Manitoba), but with significant extensions southward along the Manitoba Escarpment, and especially northward to the coast along the Nelson and Hayes Rivers. There were no atlas records in the Turtle Mountains, where the species apparently bred in 1978 (The Birds of Manitoba). Areas of greatest abundance were mostly at mid-latitudes in the Boreal Softwood Shield, but also locally in the Hudson Plains along the Hayes River, and in portions of the Boreal Taiga Plains, especially the Duck Mountains and Riding Mountain. The Boreal Hardwood Transition was characterized by a comparable detection rate but lower abundance (presumably linked to patchier coniferous habitat) compared to the Boreal Softwood Shield. The Cape May Warbler is well known for responding to budworm outbreaks; e.g. moderately elevated numbers were noted in the Whiteshell-Nopiming region of southeastern Manitoba in the early 1980s and mid-1990s (The Birds of Manitoba). It is not known whether the areas of peak abundance for the atlas are related to forest insect outbreaks, or whether they represent core areas of long-term importance. Breeding habitat is usually in spruce forest or in groves of spruce within mixed-wood forest, with an apparent preference for edges and openings as nesting locations; the nest is usually placed in thick foliage near the top of a conifer (Baltz and Latta 1998).

Trends, Conservation, and Recommendations Analysis of BBS data shows mixed trends, with declines concentrated mainly between southeastern Manitoba and central Ontario and in Atlantic Canada, and mostly stable or increasing numbers elsewhere. The overall reliability of BBS trends for this species is low, because coverage is limited and long-term population trends may be confounded by dramatic, shorter-term fluctuations. Modification of forest-insect pest control methods has reduced acute mortality of songbirds, including this species (Baltz and Latta 1998). Reduction of mature forest by forestry activities and increasingly frequent fires are thought to be significant threats (Baltz and Latta 1998), but overall conservation concern is low. Protection on the winter range may be complicated by the multitude of jurisdictions in the Caribbean region, but its winter habitat preferences are varied.