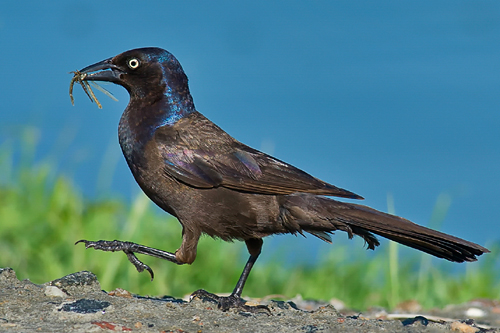 Characteristics and Range The Common Grackle's bold swagger, adaptability, and broad range of diet and habitat preferences, have made it one of North America's most numerous (but sometimes disliked) birds. Manitoba grackles belong to the migratory "bronzed" subspecies. The glossy black male is easily distinguished from other Manitoba blackbirds by his large size, massive bill, long keeled tail, yellow eyes, and extensive iridescence. The dark-brown female is smaller, shorter-tailed, and less iridescent. The breeding range extends from parts of the southern Northwest Territories and northeastern British Columbia across Canada to the Gulf of St. Lawrence, southward through the Great Plains to Texas and all of the eastern conterminous U.S.A. According to BBS analysis, abundance is highest in a belt from the Dakotas to the Lower Midwest. The northern winter boundary arcs through the southern Great Lakes and the western boundary runs from southern Minnesota to Texas. Individuals and small groups regularly attempt to overwinter in Manitoba, usually at feeders, but often depart or succumb when faced with January cold snaps.

Distribution, Abundance, and Habitat The Common Grackle was detected in 88% of surveyed squares in the Prairie Potholes, then with declining frequency in the Boreal Hardwood Transition (65%), Boreal Taiga Plains (40%), and Boreal Softwood Shield (26%), and in just three squares within the Taiga Shield & Hudson Plains. Point-count-based abundance and frequency were much higher in the Prairie Potholes than the boreal forest. The Common Grackle was documented >100 km north of the range depicted in The Birds of Manitoba, reaching Big Sand Lake, Waskaiowaka Lake, Shamattawa, and almost to York Factory. Within the boreal forest, abundance and probability of observation were both highest in a zone northeast of Lake Winnipeg that is rich in lakes and rivers. Conspicuous and sometimes semi-colonial nesting (often in ornamental conifers and shelterbelts) and noisy post-fledging habits led to a high frequency of confirmed breeding, especially near human habitation in the Prairie Potholes. Even in forested regions with low grackle densities, breeding is easily confirmed by the adults' long, direct flights carrying food or fecal sacs, usually in the vicinity of rivers, lakeshores, and swamps.

Trends, Conservation, and Recommendations The Common Grackle benefited enormously from land clearing and agricultural development since European settlement through to the first half of the 20th century ( Peer and Bollinger 1997 ). In the latter half of the 20th century, the entire Common Grackle population began to decline and it was estimated at 73 million in 2011, representing a 40-year decline of ~60% (Strassburg 2011). The decline is widespread, though only slight and not statistically significant in Manitoba, and partly offset by locally increasing trends, especially in the Great Plains (BBS data). It is not unusual for several individual CBC totals in the eastern and Midwestern U.S.A. to exceed 100,000 birds, and counts sometimes run into the millions. Given these high numbers, management of this species tends to emphasize lethal control rather than conservation, because it is a significant agricultural pest and a disease vector for histoplasmosis at major roosts (Peer and Bollinger 1997). Numbers in Manitoba, however, rarely exceed minor nuisance levels.