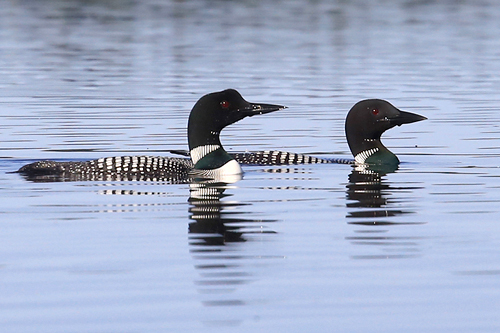 Characteristics and Range The Common Loon is easily recognized and famed from being featured on Canada's one-dollar coin, the "loonie". For many people, it is a symbol of untouched wilderness and a healthy environment. It breeds in freshwater habitats in Canada, Alaska, small portions of the conterminous U.S.A., Greenland, Iceland, and Svalbard. About 4% of the global breeding population occurs in Manitoba; these birds migrate southeast in fall, with stopovers on Hudson and James Bay and the Great Lakes to overwinter along the Atlantic coast of North America. Other populations overwinter along the Pacific coast and the Gulf of Mexico (Evers 2007).

Distribution, Abundance, and Habitat The distribution and abundance depicted by the atlas closely matches The Birds of Manitoba, with some minor exceptions along the southern breeding range limit. Breeding birds were found with the greatest frequency on the innumerable lakes of the Boreal Softwood Shield, followed by the Boreal Taiga Plains, Boreal Hardwood Transition, and Taiga Shield & Hudson Plains. The greater relative abundance was observed in the Porcupine Hills, Duck Mountains, Riding Mountain, and Turtle Mountains. These areas supplied high-quality breeding sites consisting of numerous clear-water lakes with an abundance of small fish, and ample nesting and territory sites in the form of small islands and irregular shorelines (Evers et al. 2010). Due to lower availability of suitable nesting lakes, the species was less likely and lower in numbers in the Interlake region and near the Hudson Bay coast and in the Prairie Potholes.The Birds of Manitoba states that "numbers appear to taper off north of the Cochrane River", but the computed relative abundance was uniformly high throughout the northwest. The Birds of Manitoba, also describes the species as being absent from the agricultural regions of the Prairie Potholes, but atlas data suggest this may be changing. There were over a dozen occupied squares throughout this area, including some confirmed breeding, suggesting that the species has slowly moved beyond its previous predominantly boreal limits. This pattern is occurring elsewhere along the southern periphery of the species' range, including parts of southern Ontario and the extreme northeastern conterminous U.S.A., where breeding Common Loons have recolonized southwards (Evers et al. 2010).

Trends, Conservation, and Recommendations Despite a range of diverse threats, BBS and expert opinion suggest populations are stable or moderately increasing throughout Canada and Manitoba. Results from Bird Studies Canada's Canadian Lakes Loon Survey, however, suggest the number of chicks produced per pair per year has declined over the past few decades across Canada, perhaps mostly due to ongoing mercury and acid-rain pollution. The decline in chick production may be steeper in western Canada, including Manitoba, compared to farther east, although the number of chicks fledged is apparently still high enough to sustain or slightly increase the number of breeders across southern Canada (Tozer et al. 2013). This calls for continued or expanded monitoring of reproductive success, as an early-warning system to track mercury and acid-rain effects and other threats.