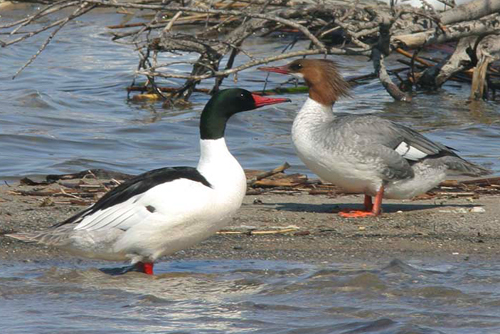 Characteristics and Range This large, fish-eating duck is one of the first migrants to arrive in Manitoba in spring and among the last to leave in fall. The breeding male's dark head, back, and wings contrast with a salmon-tinged white body; the red, saw-toothed bill is striking. The female has a reddish-brown head with a shaggy crest, mostly grey body, and diagnostic white chin. The breeding range includes southern Alaska and at least part of every Canadian province and territory, except Arctic and prairie regions. Southward extensions into the U.S.A. are mostly in mountainous regions of the northwest (locally south to Arizona and New Mexico) and forested regions of the northern Midwest and the northeast, but also include recent reoccupation of historic breeding range in the southern Appalachians (Brinkley 2016). The main winter range is in the conterminous U.S.A. (excluding the southeast and barely extending into Mexico), northward to parts of southern Canada, and along the Pacific coast to the Aleutians. Some overwinter in the Prairie Provinces but never more than a handful in Manitoba.

Distribution, Abundance, and Habitat Atlas records are distributed province-wide, but are scarce in most of the extreme south and absent from intensive agricultural regions. The observed distribution is influenced by access to water (many canœ routes can be traced on the breeding-evidence map). Unfortunately, meaningful abundance and probability-of-observation maps could not be derived. Confirmed breeding records are also widely distributed, but absent from the well-surveyed areas within about 150 km of the Hudson Bay coast. Jehl (2004) noted a dramatic increase in summering Common Mergansers, mostly males, in the Churchill region during the late 20th century. It therefore seems likely that moult migrants contribute to coastal atlas records, making the northern breeding range limit difficult to define (as implied by the map in The Birds of Manitoba). While large cavities in trees are favoured, many other nest settings are used, including ground nesting (Baldassarre 2014) and holes in banks in northern Manitoba (C. Artuso, pers. obs.), therefore the range may not be rigidly tied to suitable trees of cavity-providing species. Nevertheless, the Common Merganser is essentially a bird of boreal lakes and rivers sufficiently deep to support fish populations.

Trends, Conservation, and Recommendations Common Merganser population trends and abundance are poorly known, because of survey limitations, including peripheral coverage by the BBS and lumping with Red-breasted Merganser in some aerial waterfowl surveys (Baldassarre 2014). While the BBS helps to document some population increases and range extensions in the conterminous U.S.A., trends are significantly downward (albeit low in reliability) in Manitoba, Canada, and survey-wide (4.6%). As a fish-eater, the Common Merganser is vulnerable to environmental contamination, both directly by bioaccumulation and indirectly by depletion of fish stocks in contaminated waters (Baldassarre 2014, Pearce et al. 2015). A taste for salmonid fish sometimes exposes it to human ire but, being poor table fare, it suffers minimal hunting pressure. While it has been recognized as an indicator species for aquatic environmental quality, there is little information on its conservation. The wide distribution demonstrated by the atlas supports the current low level of concern, but improved population monitoring is needed.