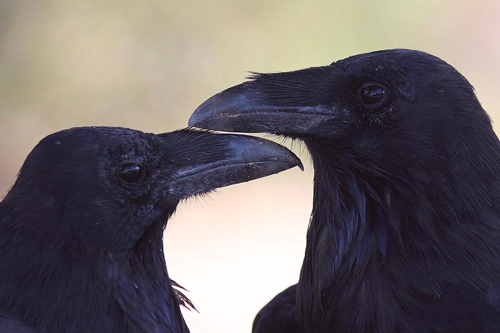 Characteristics and Range Large, powerful, and intelligent, the formidable Common Raven has inspired both awe and fear in folklore from across the Northern Hemisphere. In northern Manitoba, where it is one of very few highly visible species in winter, it is affectionately known as the "Thompson Turkey". Its large size, large beak, and wedge-shaped tail distinguish it from its likewise all-black relative, the American Crow. The Common Raven is largely resident throughout an expansive range across Eurasia and northern Africa, Greenland, most of Canada and Alaska, and south through New England and along the Appalachian Chain in the east, as well as along the Western Cordillera and the arid regions of the west, as far south as northern Nicaragua (Boarman and Heinrich 1999).

Distribution, Abundance, and Habitat The Common Raven was confirmed nesting throughout the province, including the extreme southwest (where shown as a winter visitor only in The Birds of Manitoba). The Common Raven has suffered persecution at human hands, which, in conjunction with the demise of the bison, caused its extirpation as a breeding species from the Prairie Potholes (Houston 1977). Range maps are still often drawn excluding this area (e.g., Boarman and Heinrich 1999), but atlas results show that the Common Raven's recolonization of the Prairie Potholes, including agricultural areas and more recently urban areas, is now largely complete. Despite province-wide nesting, the relative abundance and probability of observation were highest in the boreal biome, gradual decreasing both northward and southward such that the mean abundance in the Prairie Potholes was similar to that of the Taiga Shield & Hudson Plains (roughly half of mean abundances in the other boreal BCRs). Abundance becomes moderately high again on the Hudson Bay coast, especially where trees occur close to the intertidal zone, but with the lowest mean abundance in the Arctic Plains & Mountains, with few trees or cliffs for nesting. Transmission towers and other tall structures are favoured for nesting, especially in cities and the far north, but even in forested regions when available. Other nesting sites in the extreme north have included the Ithaka shipwreck in Churchill and cabins. In grassland areas of the Prairie Potholes, several nests were located on inactive oil derricks.  Roadways may provide a good food supply for this scavenger but juvenile birds fall victim to vehicle collisions. Even in the boreal biome, relative abundance may be higher along highways, railways, and power lines than elsewhere (as has been shown in deserts, Knight and Kawashima 1993).

Trends, Conservation, and Recommendations In part thanks to legal protections, the Common Raven has rebounded from former persecution in Manitoba and Canada (BBS data). It is still listed as Threatened, Endangered or Extirpated in some jurisdictions in eastern U.S.A. As a scavenger, it benefits from human wastage and is frequently observed at landfill sites and feeding on roadkill. A skilled nest robber, the raven's return to the prairies could potentially impact other species, although there is currently no supporting evidence of this in Manitoba. Lethal control of the Common Raven, where it is perceived as posing problems to livestock or Species At Risk, has been ineffective or at best only partly successful (Boarman and Heinrich 1999).