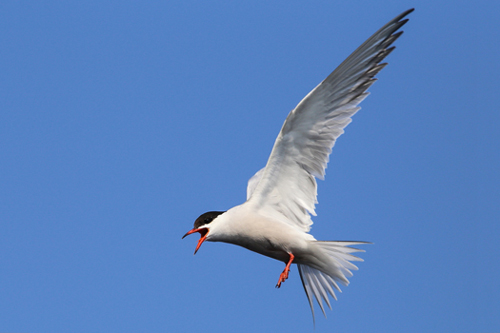 Characteristics and Range Terns are slender birds associated with aquatic habitats. Those of the genus Sterna include three Manitoba species (Common, Arctic, and Forster's) that are very similar: largely white, with long, slender wings and deeply forked tails, with mostly grey upperwings and striking black caps in breeding plumage. The Common Tern has a red bill with a black tip and its primaries are darker than in the other two species. The North American breeding range stretches from the Northwest Territories and Alberta east to Newfoundland and south to the northernmost tier of states in the conterminous U.S.A., but farther south along the Atlantic coast. Overwintering occurs coastally in South and Central America and in some parts of the Gulf of Mexico. Other populations occur in the Caribbean and much of Eurasia with wintering in Africa, southern Asia, and Australasia (Nisbet et al. 2017).

Distribution, Abundance, and Habitat Common Terns were widely and evenly distributed in much of the province except the northeast (Hudson Bay coast) and the south (most of the Prairie Potholes, the southernmost Boreal Taiga Plains and much of the Boreal Hardwood Transition). Unlike the range estimated in The Birds of Manitoba, no breeding evidence was recorded in the western boreal islands of Riding Mountain, Duck Mountains, and the Porcupine Hills, despite confirmed breeding in lakes east of the Manitoba Escarpment.  The greatest numbers were found at the large lakes in the south, especially Lake Winnipeg. Aerial surveys in 2012 located an estimated 5,044 breeding pairs here, in 15 colonies, the largest one of which, at "Mexico Island" (islet southwest of Reindeer Island), harboured 1,662 pairs. Another 2,559 pairs were located at Lakes Winnipegosis and Manitoba, plus smaller numbers elsewhere (Wilson et al. 2014). Surveys conducted in 2011 in the region north of Lake Winnipegosis, between Athapapuskow Lake and Cormorant Lake, located 773 pairs in 29 colonies (Wilson 2013). Overall abundance is difficult to ascertain, and colonies along major rivers were not surveyed, but these data show that the largest lakes harbour the largest colonies and the most birds (Wilson et al. 2014). Medium to large-sized lakes, with relatively clear water, are favoured. Here, colonies are located on sandspits, sandy reefs, and rocky islets, with most feeding taking place near the colonies. One colony at Cormorant Lake was mixed with a colony of Forster's Tern, with the Common Terns nesting on the rocky substrate of the island and the Forster's Terns in dense emergent vegetation along the periphery (Wilson 2013). Common Terns avoid nesting at the same sites as Herring Gulls, thereby avoiding nest predation (Wilson 2013).

Trends, Conservation, and Recommendations BBS trends show a declining trend in Manitoba but reliability is low. It appears clear that there has been a decline, although recent high water levels in Manitoba lakes doubtless influence colony counts. In the George Island region 700 pairs were estimated in 1970 and 1986, while none were found in 2004 (Wilson et al. 2014). Comparable counts at major colonies declined from an estimated 15,000 - 20,000 pairs in the 1990s to just 6,568 pairs in 2012 (Wilson et al. 2014). Displacement and predation by gulls at breeding colonies, toxic chemicals, human disturbance at breeding sites, flooding of nests, and eutrophication have been suggested as causes of these declines (Wilson et al. 2014). Systematic monitoring of breeding colonies is recommended.