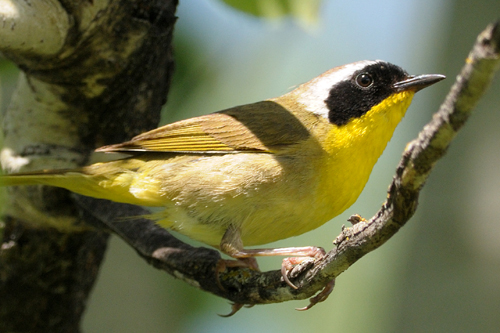 Characteristics and Range A loud song of repeated wichity and similar phrases, usually emanating from wet areas of dense grasses and shrubbery, announces the male Common Yellowthroat with his dramatic black mask and rich yellow throat and upper breast. The female is plain by comparison but still distinguished by a pale yellow throat. Common Yellowthroats breed from Yukon and the Alaska Panhandle across Canada to Newfoundland, southward to include most of the conterminous U.S.A., and extending well into Mexico. Within this large range, the species is most abundant in a roughly triangular region between southern Manitoba, Missouri, and the Maritime Provinces (BBS data). The winter range extends from parts of the southern U.S.A. to Panama and the northern Caribbean.

Distribution, Abundance, and Habitat The Common Yellowthroat was detected in about 90% of surveyed squares in the Boreal Hardwood Transition, Prairie Potholes, and Boreal Taiga Plains, but less than 50% in the Boreal Softwood Shield, where pockets of the favoured shrubby wetland habitat are often limited and inaccessible. Detection was reduced further to about 10% of surveyed squares in the Taiga Shield & Hudson Plains, but the species was found in three squares on the Hudson Bay coast, including one in the Arctic Plains & Mountains. Thus, while The Birds of Manitoba maps the boundary of the core range fairly accurately, the atlas results add greatly to our knowledge of sparse or localized occurrence in the north.Atlas data analysis revealed a well-defined band of peak abundance in the southern half of the Boreal Taiga Plains, extending eastward well into the Boreal Hardwood Transition. From there, abundance falls off quite steeply southward into the Prairie Potholes and northward through the boreal forest. Abundance computed from point counts may be elevated in some areas by the species' attraction to ditches and wet, disturbed areas near roadsides. The probability of observation shows a less well-defined pattern, except for a sharp demarcation between generally high probability in the southern half of the province and low in the north. Peak probability in major features of the Manitoba Escarpment may reflect intense atlas effort, while the zone of low probability in regions of intensive agriculture is quite small, perhaps reflecting ease of detection even when the species is limited to a few small patches of suitable habitat.

Trends, Conservation, and Recommendations Long-term BBS trends reveal widespread, slow population declines in most of the range, but a slight increasing trend prevails in Manitoba and some other regions. The increase in Manitoba is likely linked to the current, prolonged wet climate cycle. The Common Yellowthroat remains so widespread and numerous that there is no specific conservation concern, except for non-migratory populations in California and Texas (Guzy and Ritchison 1999). The species no doubt benefits from wetland conservation projects that include shrubby and dense grassy elements. Indeed, any efforts to retain wet, shrubby habitat, including small uncultivated pockets of farmland, are likely beneficial.