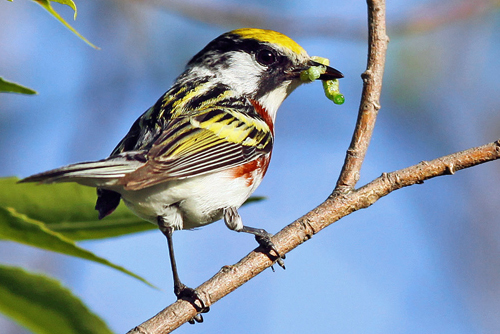 Characteristics and Range This active wood-warbler is found in shrubby deciduous and mixed woods, especially second growth. The bright yellow-green cap and chestnut flank streaks make adults unmistakable. The breeding range includes northeastern North America, extending south along the Appalachian chain, around the Great Lakes, and west through the southern boreal forest to Saskatchewan and (rarely) central-eastern Alberta. The wintering range encompasses southern Mexico to Colombia and Venezuela, where Chestnut-sided Warblers join up with mixed flocks to forage in moist, second-growth tropical forests.

Distribution, Abundance, and Habitat The atlas documented a slightly more widespread distribution within the Prairie Potholes than depicted in The Birds of Manitoba, especially along the shrubby slopes of the Red, Pembina, and upper Assiniboine River Valleys. Possible breeding, albeit localized, was also documented farther north, as far as Leaf Rapids in the west and Island Lake in the east. It remains unclear if habitat clearing (e.g., along rights-of-way) is responsible for these northernmost records. The cluster of records in seven squares in the Island Lake area is especially noteworthy given the species' apparent absence in the well-surveyed Norway House / Cross Lake area. Breeding records in the Boreal Hardwood Transition are often associated with roadsides, small clearings, and shrubby growth near old sand quarries. This species is especially conspicuous in areas of Whiteshell Provincial Park affected by a 2007 windstorm and subsequent salvage operations (P. Taylor, pers. comm.).

The Chestnut-sided Warbler requires relative open and shrubby habitats, either naturally stunted aspen-oak or early successional forest. It is most commonly found in the Boreal Hardwood Transition (found in 94% of squares with ≥3 hours of effort and having a mean abundance of .4 birds per point count). Relative abundance showed an expected pattern, peaking through the southern boreal forest and the boreal-parkland transition and generally declining northward through the Boreal Softwood Shield and southward through the Prairie Potholes. Local anomalies included moderately high densities in parts of the Manitoba Escarpment (Arden Ridge, Brandon Hills, Turtle Mountains).

Trends, Conservation, and Recommendations While some other early-successional specialists (such as Golden-winged Warbler and Eastern Whip-poor-will) are declining, the Chestnut-sided Warbler appears to be stable in Manitoba (BBS data). Despite considerable increases in abundance following European settlement and forest clearing with the subsequent growth of shrubs (Bryers et al. 2013), BBS data show a range-wide decline of 44% from 1966 to 2015, likely due to loss of habitat. In Canada, the creation of second-growth forest by logging has provided additional habitat for the Chestnut-sided Warbler and it should continue to benefit as long as logged areas are allowed to regenerate.