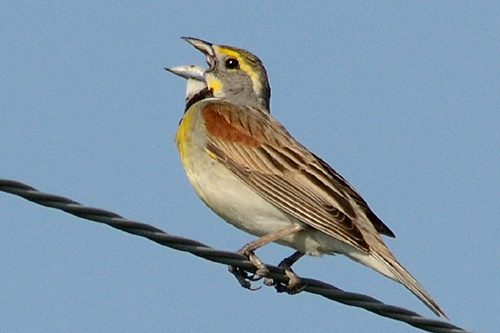 Characteristics and Range The genetic affinities of the Dickcissel are not clear; recently it has been placed with blackbirds, but it also shows characteristics of sparrows (Temple 2002). Similar in size and shape to a House Sparrow, with a colour scheme reminiscent of a meadowlark, it is the only member of the genus Spiza. Females lack the black bib of breeding males, making them also superficially similar to female House Sparrows. The common name is imitative of the loud song, dick-dick-ciss-ciss-cissel. The core breeding range of this species is in the centre of the conterminous U.S.A., but it is prone to erratic, semi-nomadic movements that lead to breeding attempts far from this core, including southern Manitoba. It winters from the southeastern U.S.A. through Middle America to northern South America (Temple 2002).

Distribution, Abundance, and Habitat During the summer of 2012 a large incursion took place across the south of the province. The first birds were found near Dencross (north of Beausejour) on 20 June by Garry Budyk and from that date on sightings accumulated rapidly (Koes and Taylor 2013b). This arrival relatively late in the year is typical for the species, and coincides with the availability of its preferred habitat of tall weeds in overgrown fields. In 2012, Dickcissels were particularly common in southwestern Manitoba, often occurring semi-colonially. The latest observations were in mid-August. There were just a few reports in 2013 and 2014. In 2012 Dickcissels were found in 7% of squares in the Prairie Potholes but were virtually absent elsewhere. There were too few observations to produce abundance maps. Most birds were found in weedy or fallow fields, in pastures with tall grass, in alfalfa or clover, and occasionally in cereal crop lands. Shrubs, fence lines, and overhead wires often serve as singing posts.

Trends, Conservation, and Recommendations The propensity of the species to use weedy fields or pastures for nesting often leads to destruction of the nests by mowing. Dickcissels are heavily persecuted on wintering grounds in Venezuela because of their perceived depredation of rice and sorghum crops. There, massive Dickcissel roosts have been poisoned with toxic chemicals, including organophosphates, applied by crop-duster planes (Basili and Temple 1999). Notwithstanding these threats, the Dickcissel seems to have been able to adapt to changes in its natural grasslands habitat, so that it now thrives in some agricultural landscapes (Temple 2002). BBS trends in Manitoba and elsewhere in Canada are of low reliability, due to the small number of detections and sporadic occurrence.