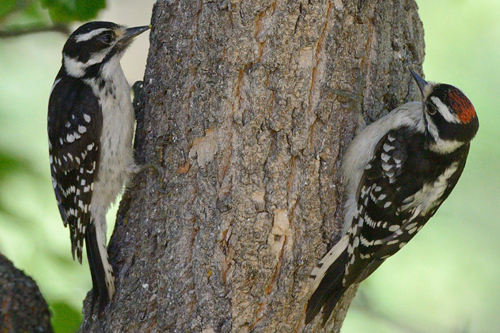 Characteristics and Range Slightly larger than a House Sparrow, the diminutive Downy Woodpecker is the smallest woodpecker in Canada. This familiar garden visitor has a black-and-white pattern with a prominent white stripe on the back. Males sport a red spot on the rear crown (extending forward in streaks on juveniles). The Downy Woodpecker's short bill distinguishes it from the larger Hairy Woodpecker, as do the black spots on its white outer tail feathers. This woodpecker tends to feed on slender woody vegetation (outer branches, saplings, willows) and even herbaceous vegetation (goldenrod galls, cattails), as opposed to the Hairy Woodpecker that tends to feed on larger tree trunks and limbs. The Downy Woodpecker is found across Canada and the U.S.A. from the northern boreal forest south to Texas, with no evidence of migration despite some long-distance dispersal events (Jackson and Ouellet 2002).

Distribution, Abundance, and Habitat The Downy Woodpecker was recorded nesting across Manitoba from the central Boreal Softwood Shield (Thompson) southward, though locally scarce or absent in intensive agricultural regions, especially southwest of Winnipeg. This matches the distribution depicted in The Birds of Manitoba, although records along the Hayes River and north of Island Lake suggest a more extensive range in extreme eastern Manitoba. The Downy Woodpecker was found to be more abundant in southern Manitoba than in the central boreal forest. The highest abundances were along the boreal-parkland transition, particularly the southernmost portions of the Boreal Taiga Plains and its ecotone with the Prairie Potholes and the Boreal Hardwood Transition. Within the Prairie Potholes, the highest abundances were along the eastern edge of Riding Mountain, following the Arden Ridge, and the wooded portions of the Westlake Plains. Smaller areas of abundance occur in the deciduous forests of the steep-sided Upper Assiniboine and Qu'Appelle River valleys. This woodpecker is thinly distributed in the northernmost Boreal Taiga Plains and the Boreal Softwood Shield. The precise northern range limit is difficult to document, although there may be an association with northern towns and communities. Atlas data suggest that the distribution excludes the Taiga Shield & Hudson Plains.

Although it uses different habitat types in different parts of its range, the Downy Woodpecker is strongly associated with deciduous forest in Manitoba and is rarely found in pure conifer stands. It is most commonly found in riparian woods, open deciduous forests, shelterbelts, and parks and gardens in urban and rural areas. The preference for deciduous species, even if as young stands or as a well developed shrub layer (Jackson and Ouellet 2002), explains the Downy Woodpecker's thin distribution along its northern range limit in Manitoba in the conifer-dominated Boreal Softwood Shield.

Trends, Conservation, and Recommendations The Downy Woodpecker is both abundant and versatile, capable of residing in disturbed or altered habitats and is often closely associated with humans. It readily uses bird feeders, but suet feeding on mild winter days can cause loss of facial feathers (Jackson and Hoover 1975). BBS data suggest a slight increase in Manitoba and relative stability across Canada, so there is little current conservation concern.