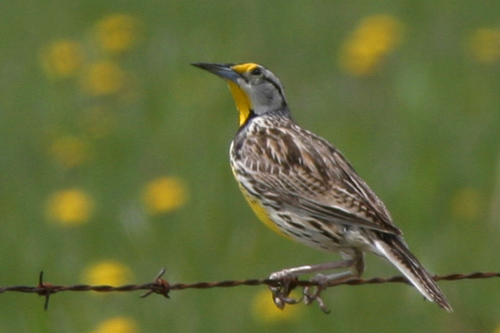 Characteristics and Range The Eastern Meadowlark closely resembles its familiar western counterpart, differing only by bolder dark markings and less extensive yellow around the throat. The song, a series of plaintive whistles, is quite distinct from the Western Meadowlark's rich melodies. There is at least one record, however, of a fluently "bilingual" meadowlark in Manitoba, and also examples of songs with intermediate character (Taylor 1985, The Birds of Manitoba). This could indicate hybrid ancestry or simply exposure of either species to both song types. The Eastern Meadowlark's dzert call note, being innate rather than learned, is more reliable than the song as an identifying characteristic. The primary breeding range extends from northwestern Ontario and northern Minnesota to the Gulf of St. Lawrence, southward throughout the eastern U.S.A., plus the desert grasslands of New Mexico and some neighbouring states, to Mexico, Central America, Cuba, and northern South America (Jaster et al. 2012). Only the northernmost breeding population (nominate subspecies) is migratory, moving as far south as Texas and the Gulf coast (Jaster et al. 2012, COSEWIC 2011).

Distribution, Abundance, and Habitat Three singing male Eastern Meadowlarks were found during atlas fieldwork, all in old pastures within the Boreal Hardwood Transition: near Seddons Corner and East Braintree in 2012, and near Lac du Bonnet in 2014. Western Meadowlarks were also present at all three locations. These observations fit the pattern of occasional occurrence of the Eastern Meadowlark in southeastern Manitoba, there now being about 20 records since the first confirmed observation near River Hills in 1981 (Taylor 1985).

Trends, Conservation, and Recommendations The Eastern Meadowlark was designated Threatened in Canada in 2011, based on persistent decline (estimated at 71% between 1970 and 2009) linked in large part to loss of suitable hayfield and pasture habitat to other land uses (COSEWIC 2011). There is no evidence of territory reoccupation in successive years in Manitoba, and hence no indication of a sustained Eastern Meadowlark population in the province. Indeed, the preponderance of June records suggests dispersal of failed breeders into Manitoba, possibly displaced by early hay mowing elsewhere (The Birds of Manitoba). Therefore, no conservation recommendations can be made.