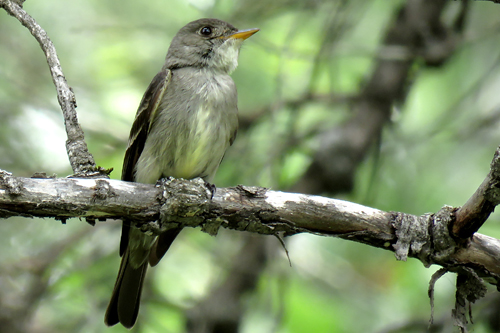 Characteristics and Range The distinctive, drawn-out song that gives rise to the name "pewee" is perhaps the most characteristic feature of this nondescript flycatcher. The Eastern Wood-Pewee breeds throughout the eastern forests of North America, extending west into wooded areas of the Prairie Potholes as far as eastern Saskatchewan, and north into the southern boreal forest, reaching its northern range limit in southern Manitoba. This long-distance migrant winters primarily in northern South America in the eastern Andes below 1500 m elevation and in the western Amazon Basin (McCarty 1996). It is a species of various deciduous, coniferous and mixed forests and edges. In its wintering range, it is more common in second-growth forest, gaps, and edges.

Distribution, Abundance, and Habitat The atlas showed that the range of the Eastern Wood-Pewee extends farther north than depicted in The Birds of Manitoba by approximately 200 km on the east side of Lake Winnipeg to the Poplar River, and in the west as far north as The Pas. This probably represents an extension of our knowledge rather than a range extension. It appears patchily distributed near its northern range limit, perhaps tied to tall forests such as riparian corridors and isolated pockets of old growth. In extreme southwestern Manitoba, suitable habitat also appears mostly limited to riparian woods.

Peak abundance occurs in the Boreal Hardwood Transition, decreasing northward and westward but with some smaller pockets of relatively high density along well-wooded sections of the Manitoba Escarpment. Both dense forest and more open woodlands with gaps and edges are used by the Eastern Wood-Pewee, and in some parts of the range it is found in woods as small as 2 ha or riparian strips as narrow as 20 m (McCarty 1996). It is arguably most common in mature deciduous woodlands but also breeds in mixed-wood and coniferous habitats, including both native and non-native pine plantations. One commonality of its various habitat types in Manitoba is substantial open sub-canopy space, such as where widely spaced mature trees, especially oak and poplar, create a closed canopy. It now appears largely absent as a breeder from large wooded parks in Winnipeg, such as Kildonan Park, where it formerly bred. It still breeds in riparian habitat in city outskirts and wooded parks in small towns.

Trends, Conservation, and Recommendations The Eastern Wood-Pewee was listed as a species of Special Concern by COSEWIC in November 2012. BBS data show that it has experienced long-term declines in Canada. The Manitoba long-term trend is not statistically significant overall, but there is a significant trend in every BCR in the species' provincial range except the Prairie Potholes. The causes of decline may include habitat loss (on both wintering and breeding grounds), changes in food availability, high mortality rates, and other factors (COSEWIC 2012). This species would benefit from careful planning of resource extraction activities in wooded habitats, especially in the boreal-parkland transition. There are opportunities for foresters to manage habitat for this species through selective harvesting and thinning. Mosquito fogging in urban areas should be studied in terms of its local impact on aerial insectivores and other species, and regulated as appropriate.