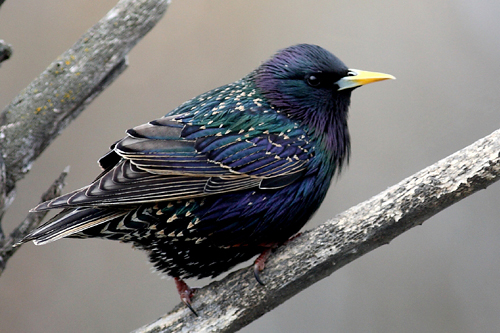 Characteristics and Range The European Starling resembles a short-tailed blackbird with a slender, pointed bill (yellow when breeding) and varying amounts of iridescence and speckling according to age and season. Juveniles are plain grey-brown. The flight silhouette suggests a waxwing or a small meadowlark. A native of western Eurasia and widely introduced elsewhere, the European Starling's dramatic spread across North America from an ill-considered introduction in New York in 1890-1891 is well known. Its history in Manitoba and neighbouring regions has been reviewed in detail (Taylor et al. 2016). It currently occurs from the edge of the Canadian Arctic to Florida, northern Mexico, and the northern Caribbean. Though it is present from coast to coast, BBS data indicate peak breeding abundance in the U.S. Midwest. Northern populations are largely migratory, though substantial numbers overwinter in southern Canada including Manitoba, and the winter range extends a little south of the breeding distribution (Cabe 1993).

Distribution, Abundance, and Habitat The European Starling occurs primarily in agricultural and urban areas of Manitoba, but also breeds sparsely across the boreal forest, where it is largely but not entirely associated with human habitation (Taylor et al. 2016). The northernmost records in the Taiga Shield & Hudson Plains were all associated with human structures, in communities such as Churchill, around lodge buildings such as at Nejanilini Lake, near abandoned buildings along the railway, and one (found dead) in the compound on the Owl River in Wapusk National Park. Abundance and probability-of-observation maps show two centres of abundance, mostly within the Prairie Potholes: one in the southwest, mainly south of the Pembina and Souris Rivers, and the second extending from the Red River valley to the southeastern Interlake (southern Boreal Taiga Plains) and eastward to the limits of intensive agriculture in the Boreal Hardwood Transition. These two zones are prominently separated by the Arden Ridge, a reflection of general scarcity in heavily wooded regions. Ideal breeding habitat is mixed farmland with scattered, small woodlots. Nesting opportunities are provided by woodpecker cavities in dead trees and snags, small openings in old (not necessarily disused) buildings, and nest boxes.

Trends, Conservation, and Recommendations Since the European Starling is an invasive species, management is concerned with its control rather than conservation. Though it is a beneficial consumer of pest insects, harmful aspects include competition with native birds for nest cavities, mess and contamination caused by droppings, and damage to fruit crops (Cabe 1993). Measures to limit damage, including lethal control methods, have limited success at best (Cabe 1993). In Manitoba, the European Starling is probably only a minor agricultural pest, but competition for cavities with native birds, especially bluebirds, Red-headed Woodpecker, and Purple Martin, is cause for concern. Starlings can be excluded from bluebird nest-boxes and martin houses by designs with appropriate entrances. The European Starling's fortunes in North America peaked some decades ago, and BBS population trends are almost consistently downward across North America, though trends in wintering numbers are nuanced by differences between urban and agricultural areas (Taylor et al. 2016).