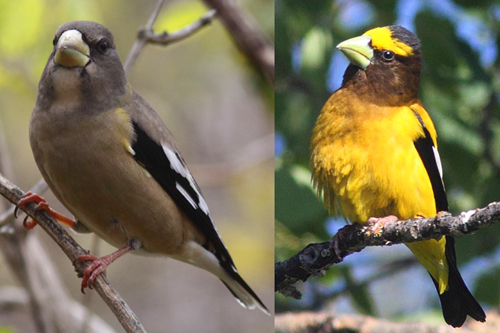 Characteristics and Range This large finch with bold yellow-and-black plumage is often associated with winter feeders near southern forested regions, moving away from populated areas towards the end of May and becoming more secretive in summer. The Evening Grosbeak occurs along the Western Cordillera in disjunct areas as far south as the central Mexican highlands, and east across the southern boreal forest to southern Newfoundland. Predominantly a southern boreal breeder in Manitoba, it also nests in some limited portions of the Prairie Potholes. It regularly winters south of the boreal-parkland transition. This species was formerly rare east of the Rocky Mountains, but expanded its range eastward beginning in the mid-1800s (Gillihan and Byers 2001). Its status in Manitoba at that time is uncertain, but by the 1890s it was considered a common winter visitor and possible breeder (Thompson [Seton] 1890).

Distribution, Abundance, and Habitat Atlassers found the Evening Grosbeak farther north than estimated in The Birds of Manitoba, both east of Lake Winnipeg as far north as Oxford House and northwest along the Burntwood River. There were several atlas records during the breeding season in extreme southwestern Manitoba (mostly in towns), in areas where they have not formerly been documented to breed. Nesting in towns has occurred in Manitoba: two nests were found in Selkirk in 1930 (Bent 1968). In Manitoba, the Evening Grosbeak breeds mostly in mature mixed woods and is infrequently found in pure deciduous sites. In western Manitoba, it is more abundant and shows much higher probability of observation in coniferous habitats on the elevated portions of the Manitoba Escarpment than on the deciduous-dominated slopes and surrounding lowlands. In southeastern Manitoba, there is higher relative abundance and greater probability of observation in the mixed forests of the Boreal Hardwood Transition and the southernmost Boreal Softwood Shield than in aspen and oak-dominated habitats in the Boreal Taiga Plains. Breeding in the Prairie Potholes appears limited to sites with some native or planted conifers, with confirmed breeding only in the Spruce Woods area. During the non-breeding seasons, a much greater variety of habitats is used, including parks and gardens.

Trends, Conservation, and Recommendations Although difficult to interpret, in part due to considerable fluctuations around spruce budworm outbreaks and winter nomadism, BBS data show significant declines in Manitoba and Canada since the 1970s. A variety of combined analyses using data from Project FeederWatch, CBC, BBS, and other sources have documented widespread recent declines (Bolgiano 2004, Bonter and Harvey 2008, Ralston et al. 2015). The provincial S-rank was changed from Secure in 2005 to Vulnerable in 2009 and this species was listed as Special Concern by COSEWIC in November 2016. The causes of decline are unclear; however, habitat change as mature mixed forests are lost or altered by forestry (especially given the species' association with old growth) and chemical means of budworm control require investigation (Bonter and Harvey 2008). Although unlikely to be the primary cause of decline, large numbers are sometimes killed by vehicles striking flocks feeding on grit or salt on roads (Gillihan and Byers 2001), and salt toxicity is also implicated in roadside mortality (Brownlee et al. 2000). Finch eye disease (mycoplasmal conjunctivitis) may be an additional problem (Mikaelian et al. 2001), individuals with conjunctivitis being frequently observed at feeders in Manitoba (pers. obs.). Mortality from salmonellosis outbreaks at feeders is also reported (Dawson 2014).