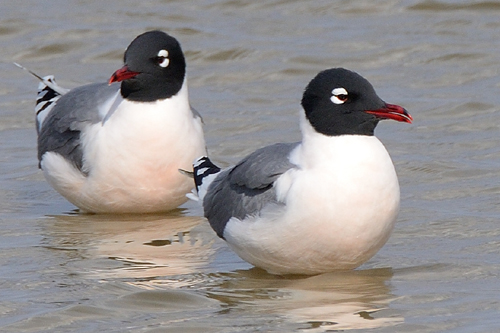 Characteristics and Range This dark-headed gull with prominent, white eye crescents and a bold red beak in breeding plumage has the darkest back and wings of any regularly occurring Manitoba gull species. Franklin's Gull is a true "prairie gull" in the sense that its breeding range is centred on the Prairie Potholes, although extending north into the central boreal biome from Alberta to Manitoba and south in scattered locations in the U.S. Midwest. It nests in large prairie wetlands and forages widely in open habitats, including fields, and winters along the Pacific coast of South America (Burger and Gochfeld 2009).

Distribution, Abundance, and Habitat The distribution recorded during the atlas is very similar to that depicted in The Birds of Manitoba. The colonies recorded at Whitewater Lake, Plum Lake, Lizard Lake, and Netley-Libau Marsh are similarly to the historical record, with a notable absence of confirmed breeding at Oak Hammock Marsh (where a then-perennial colony was estimated at 11,000 birds in 1995, The Birds of Manitoba) and at Delta Marsh (although there were several nearby colonies at Jackfish Lake). Franklin's Gulls forage in flocks in hay fields, cultivated fields and other agricultural areas, as well as at landfill and dump sites, typically within 25 km of nesting colonies and often associated with Ring-billed Gulls. There is some dispersal from colonies in Minnesota and North Dakota into Manitoba in July (Burger and Gochfeld 2009), which complicated atlassing for this species; for example, nesting colonies were found in only 11 of 123 squares in which the species was detected. Some additional summer observations outside of the mapped distribution, for example on the eastern shore of Lake Winnipeg, were coded as non-breeding.

The breeding range in Manitoba was centred in the Prairie Potholes, with the Boreal Taiga Plains being the only other BCR where possible breeding (or higher) was recorded (Netley-Libau Marsh had the only confirmed breeding outside of the Prairie Potholes). The probability of observation suggests that large marshes around Lakes Manitoba and Winnipegosis, and spreading west from this area to include Whitewater Lake and Oak Lake, represent the current provincial nesting hotspots. Nonetheless, there were some nesting records in ephemeral wetlands, such as Maple Lake and Herman's Slough, which were greatly enlarged during the high-water years of the atlas period. Franklin's Gull is said to prefer to nest in emergent marsh vegetation that is relatively sparse (Burger and Gochfeld 2009), but colonies at Whitewater Lake and elsewhere have also been found in vast cattail beds.

Trends, Conservation, and Recommendations Although this species is not well surveyed by point counts, BBS data suggest a long-term decline of Franklin's Gull in Manitoba, but surveys of colonies do not strongly support this (Burger and Gochfeld 2009). Current colony sizes in western Manitoba appear large, with water levels still very high in many areas; for example, in 2007, 92,000 pairs nested at Whitewater Lake, the largest known colony at the time in Canada, and probably anywhere in the range (Beyersbergen et al. 2008). Nonetheless, the disappearance or significant reduction of colonies towards the eastern edge of the Manitoba range suggest that displacement has occurred (possibly related to changes in water levels, intensive agriculture, Ring-billed Gull population increases and other factors, P. Taylor, pers. comm.). Franklin's Gull is susceptible to human disturbance at colonies and to drought conditions. Fluctuations in colony sizes and locations are therefore to be expected and range-wide colony surveys are recommended as a monitoring tool.