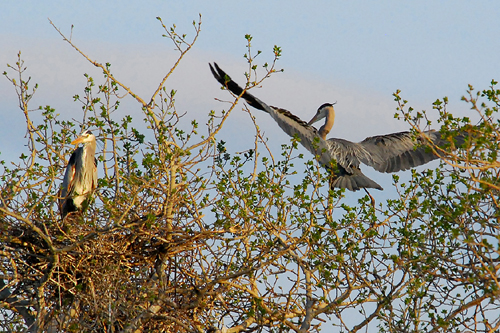 Characteristics and Range Manitoba's largest heron is a familiar sight throughout most of the southern half of the province. Its plumage is mostly grey and somewhat similar to that of a Sandhill Crane, with which it is often confused by non-birders. The Great Blue Heron has the widest range of any North American heron and breeds from the central boreal forest southward to northern South America, but is largely absent from the Rocky Mountains. Most Canadian breeders winter south of the U.S. border, except for birds in British Columbia and some in the Maritimes (Vennesland and Butler 2011). There have been no recoveries of birds banded in Manitoba, but Great Blue Herons from Alberta and Saskatchewan have been recovered to the south and southeast, in central southern U.S.A. (Dunn et al. 2009).

Distribution, Abundance, and Habitat The Great Blue Heron is widespread in southern Manitoba with most records coming from the Prairie Potholes, Boreal Taiga Plains, and Boreal Hardwood Transition. Surprisingly few were found in the Boreal Softwood Shield, where tree cover may be too continuous to provide much nesting habitat and shallow-water foraging opportunities may be more limited. Few birds were found north of The Pas and Lake Winnipeg. The regions with highest relative abundance were the extreme southwest corner of the province, including the Turtle Mountains, the central Interlake, and the eastern areas of the Riding Mountain escarpment, the Duck Mountains and the Porcupine Hills. The probability of observation was likewise highest in these areas, but also high in the southeastern portion of the Boreal Hardwood Transition.

Preferred feeding habitat includes shores of waterbodies of any size, stream banks, and marshes. Nesting often takes place in small colonies in vegetation on islands, probably to avoid ground predators (Vennesland and Butler 2011), but may also occur in trees along riverbanks or occasionally on the ground. Most colonies in Manitoba are in areas of limited access, minimising the risk of disturbance by humans. Boreal colonies are typically in swampy clearings such as beaver meadows with dying trees, sometimes several kilometres from a water body, making detection difficult (P. Taylor, pers. obs.). Of the 21 colonies found through atlas fieldwork, size ranged from 1 - 50 nests (average 15) but this dœs not include many large and remote heronries. Former aerial surveys of colonial nesting birds suggest that colonies in Manitoba typically have fewer than 10 nests but with some as large as 350 nests, averaging 43 nests per colony, and with a provincial population likely exceeding 3,000 pairs at 100 colonies (The Birds of Manitoba).

Trends, Conservation, and Recommendations BBS data for Canada show a slight long-term decrease but the trend in Manitoba is stable to slightly increasing. Increases have occurred in the Prairie Potholes, while decreases took place in the Boreal Softwood Shield and Boreal Hardwood Transition. However, the data set for the province is rather small and hence has low reliability. Key threats appear to be destruction and degradation of habitat, disturbance of nesting colonies, and possibly contaminants. The Bald Eagle is an important predator; however, Great Blue Herons sometimes nest beside eagles, apparently reducing mortality from other predators, including other eagles (Vennesland and Butler 2011).