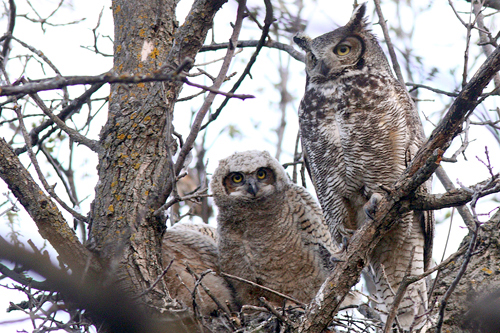 Characteristics and Range The Great Horned Owl is familiar to most North Americans, both because of its haunting song, popularized in cinema and television, and its large size and distinctive "horned" appearance. The Great Horned Owl is distributed throughout most of the Americas from the Arctic treeline to Tierra del Fuego. It is absent from much of the heavily forested Amazon Basin and is likewise scarce in other densely forested regions such as the central boreal forest. Those exceptions aside, it is found in a staggering variety of habitats including woodlands, grasslands, deserts, suburbs, and at very high elevations. This owl is largely resident, although some non-breeding dispersal occurs (Artuso et al. 2014). Northernmost populations cycle with hare abundance and some emigrate during food shortages (Artuso et al. 2014).

Distribution, Abundance, and Habitat In Manitoba, this species occurs in all habitats where a mosaic of trees and open areas occurs, even where trees are few and far between. It readily uses barns and abandoned buildings for nesting and roosting, as well as pipes, silos, bridges, buildings, and other structures. In Manitoba, the Great Horned Owl occurs in the highest density in the Prairie Potholes with a pattern of decreasing abundance in the sequence southwestern Manitoba > parkland > suburban areas  >  central boreal forest  > treeline. The observed pattern is probably exaggerated by limited coverage of remote regions during peak calling periods, and greater difficulty of visual detection in forested areas. In suburban areas, it is most common in sparsely populated suburbs and large "mosaic habitats" such as golf courses (Artuso et al. 2014).

Trends, Conservation, and Recommendations Widespread and common in North America, the Great Horned Owl is not considered a species of conservation concern. Nonetheless, BBS data show a long-term annual rate of decline in Manitoba and Canada. CBC data show an increase in detection rate from the 1960s to the late 1980s, but a decrease since then. Second breeding bird atlases in 11 jurisdictions have documented declines and range contractions (Artuso et al. 2014). These results must be interpreted with great caution given the limitations of these datasets for owls (diurnal species are better surveyed), but local declines could be related to reforestation, forest maturation, West Nile Virus and other factors, offset by increases in other areas (Artuso et al. 2014). Careful analysis of Manitoba Nocturnal Owl Survey data and nocturnal owl survey data from across Canada should address these questions. Mortality from anticoagulant rodenticides and bioaccumulation of other toxins pose current threats and this species would benefit from tighter regulations around environmental contaminants.