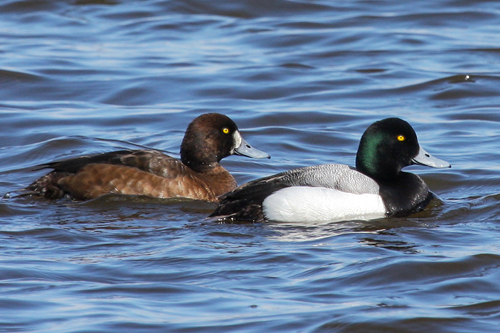 Characteristics and Range The Greater Scaup closely resembles the Lesser Scaup in all plumages, but is slightly larger and more heavily built; both sexes are usually distinguishable by the lower, more rounded head profile and more extensive white in the two-tone wing stripes (visible in flight). Subtle differences in markings and colouration are better considered as clues than definitive field marks, though rich green iridescence on the breeding male Greater Scaup's head is usually reliable. The Greater Scaup breeds from Alaska across the northern Canadian mainland (including extreme northern Manitoba) to Labrador, and at scattered, more southerly Canadian locations (Kessel et al. 2002). About 75% are believed to breed in Alaska (Baldassarre 2014). Wintering areas are mainly coastal, especially in Long Island Sound, but extending from Newfoundland waters to Florida and from Alaska to Baja California, plus the Great Lakes (when ice-free) and other inland areas. Similarly, Eurasian populations breed at northerly latitudes from Iceland and Scandinavia to Siberia and winter mainly in temperate coastal waters.

Distribution, Abundance, and Habitat The majority of atlas records were within the estimated breeding range in The Birds of Manitoba, between the Hudson Bay coast and extreme northwestern Manitoba, with scattered records southward to the north end of Lake Winnipeg. This is consistent with Jehl's description of the Greater Scaup as an abundant summer resident at Churchill and a common breeder north of the treeline throughout northern Manitoba (Jehl 2004). The probability-of-observation map corresponds more closely to atlas records than dœs the relative abundance map, and further survey work would be needed to confirm some details of inland abundance. Greater Scaup were found nesting on Little George Island, Lake Winnipeg, in 1971 (Vermeer et al. 1972). Though this island was not surveyed during the atlas period, up to 34 birds were seen there in mid-June 2007, but no nests were found (R. D. Mooi, pers. obs.). Preferred breeding habitat is near tundra ponds and shallow lakes, or on islands in lakes, with sedge or grass cover for nesting, emergent vegetation for escape cover, and abundant submergent vegetation and aquatic invertebrates for food (Kessel et al. 2002).