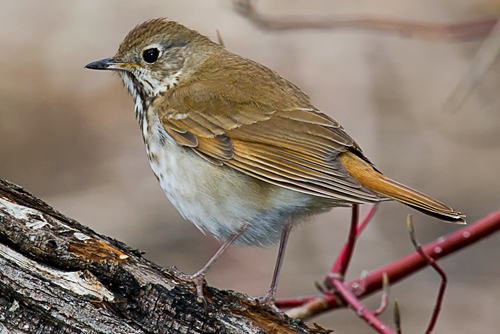 Characteristics and Range The Hermit Thrush is arguably the most familiar of Manitoba's four Catharus thrushes, due to its abundance, widespread distribution, early spring arrival and late fall lingering, and somewhat more conspicuous behaviour on migration. The Hermit Thrush's ethereal, flute-like song, with its clear introductory note and subtly rising melody, graces many a Manitoba forest with rich music at dawn and dusk. Similar in appearance to Veery, Gray-cheeked Thrush, and Swainson's Thrush, the Hermit Thrush is best distinguished by a rufous tail contrasting with a brown back. It nests across the boreal forest (even at treeline) from Alaska to Newfoundland, south around the Great Lakes and through New England to the Appalachians as far south as Virginia, as well as through much of the Western Cordillera and parts of the Pacific coast. The Hermit Thrush has a much shorter migration than its close relatives; wintering occurs from the southern U.S.A., north along both coasts to Vancouver Island and New York, and south to Mexico and Guatemala (Dellinger et al. 2012).

Distribution, Abundance, and Habitat As with Swainson's Thrush, atlas data show the Hermit Thrush nesting across the boreal biome, very slightly farther north than depicted in The Birds of Manitoba in the Nueltin Lake area. There was also possible and probable breeding farther south than previously estimated, especially in the Arden Ridge, Spruce Woods, and Upper Assiniboine River valley areas. The Hermit Thrush has expanded from its historical range in some regions such as New England, especially in response to increasing tree cover (Dellinger et al. 2012); however, it is unclear if these Manitoba data represent a southern expansion or increased survey effort. Relative abundance was evenly high throughout the Boreal Softwood Shield and adjacent areas, decreasing towards the southern boreal fringe and towards the Hudson Bay coast (no records in the Arctic Plains & Mountains). Probability of observation is similar but somewhat elevated in the boreal portions of the Manitoba Escarpment. The Hermit Thrush is mainly a species of coniferous forests, especially jack pine in Manitoba, but it also nests in mixed and deciduous forest types (The Birds of Manitoba).

Trends, Conservation, and Recommendations BBS trends show an increase in Hermit Thrush numbers in Canada since 1970 and relative stability in Manitoba; as a short-distance migrant it seems to be faring better than the long-distance migratory thrushes. During migration, Hermit Thrushes are susceptible to building and tower strikes, with high mortality counts recorded in Toronto and New York City (Dellinger et al. 2012), although the losses of Swainson?s Thrush are apparently greater in Winnipeg (R. Koes, R. Mooi, unpubl. data) and elsewhere (Loss et al. 2014). There is some evidence that the Hermit Thrush is sensitive to habitat fragmentation, making it worthy of consideration in forestry management plans (Dellinger et al. 2012).