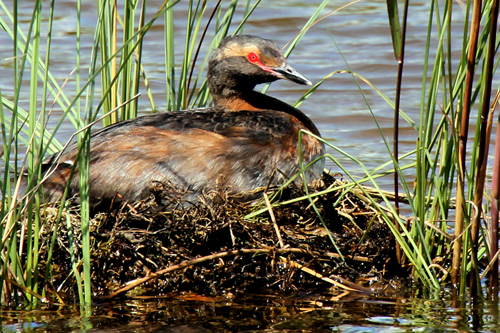 Characteristics and Range In breeding plumage, the Horned Grebe is adorned with golden feathers leading from behind each eye to the back of the head, chestnut neck and flanks, black cheeks, and a dark back. Its breeding range is Holarctic but in North America it is mostly a northwestern species, with Manitoba representing the eastern limit of the contiguous breeding range that spans from the Prairie Potholes north to Hudson Bay and westward to the Rocky Mountains and central Alaska. There is also a disjunct breeding population in the Magdalen Islands. North American populations winter primarily on both Atlantic and Pacific coasts, including the Aleutian Islands, and in the southern U.S.A. around the Gulf of Mexico.

Distribution, Abundance, and Habitat The atlas confirmed both the occurrence of the Horned Grebe throughout the province except for the east side of Lake Winnipeg and the highest prevalence (in terms of number of detections and probability of observation) in the Prairie Potholes, especially south and west of Riding Mountain National Park. Detections within the boreal biome were few and far between, with the exception of a cluster of sites around The Pas. This species was slightly more common in the Hudson Bay Lowlands than in the boreal forest, especially around Churchill and Nueltin Lake.

In Manitoba, the Horned Grebe is most commonly found in small to medium-sized permanent potholes with considerable open water and some cattails or rushes for nesting, unlike the Pied-billed Grebe which frequently uses densely vegetated marshes. Unlike the colonial Eared Grebe, it is typically solitary with one pair per pothole (The Birds of Manitoba). Its distribution pattern, centred on the Minnedosa potholes, reflects that breeding habitat preference; however, a much greater variety of water bodies is used in migration.

Trends, Conservation, and Recommendations The principal western population of the Horned Grebe was listed by COSEWIC as Special Concern in 2009. BBS data show a decline in Canada since the 1970s. The reasons for the decline are poorly understood but may include wetland loss or degradation, eutrophication, botulism, increases in certain predators such as the raccoon and the Common Raven, increased competition with Pied-billed and Red-necked Grebes, entanglement in fishing nets (estimates of 3,000 grebes and loons netted annually on southern Lake Winnipegosis alone), oil spills on wintering grounds, and possibly other factors (COSEWIC 2009b). Numerous wetlands where Horned Grebes formerly bred in southern Manitoba, especially in the Minnedosa potholes, a former stronghold for the species, now appear to be dominated by Red-necked Grebes. This species warrants careful ongoing monitoring, especially in the heavily human-altered Prairie Potholes.