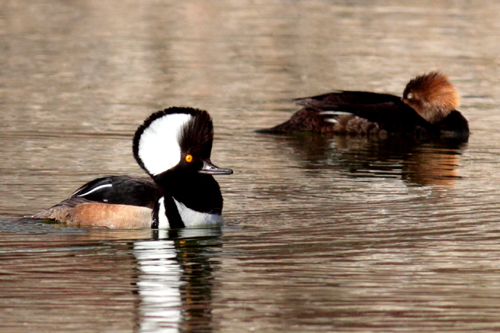 Characteristics and Range A striking duck with an extraordinary courtship display, the breeding male Hooded Merganser's most conspicuous feature is the large white patch on his fanlike crest. Subdued grey-brown tones and a rufous-tinged crest characterize the female. Smaller size and less elongated proportions easily separate this species from Red-breasted and Common Mergansers, while rapid, shallow wingbeats help identification in flight. The Hooded Merganser has separate eastern and western (Pacific Northwest) breeding ranges, with a substantial gap between eastern Saskatchewan and central Alberta (Dugger et al. 2009, Baldassarre 2014). The eastern population breeds from east-central Saskatchewan across southern Canada to the Maritimes and southward to the coastal plain of the southeastern U.S.A. Late fall brings withdrawal from northern areas, and the winter range extends to Texas and Florida, but occurrence in Mexico and the Caribbean is rare.

Distribution, Abundance, and Habitat The Hooded Merganser is best known as a bird of woodland ponds, slow-flowing creeks, and marshy bays and backwaters. This species was found province-wide, with more extensive and frequent northerly occurrence than suggested by The Birds of Manitoba. Overall detection rates were highest in the Boreal Hardwood Transition (40% of surveyed squares with ≥3 hours of effort) and Prairie Potholes (26%), followed by the Boreal Taiga Plains (19%) and other boreal regions (10% or less). Detection on point counts was too infrequent (just 38 squares province-wide) for abundance mapping, and there is no clear pattern for probability of observation.

Confirmed breeding records were also distributed province-wide, including three squares in the Taiga Shield & Hudson Plains. The Pileated Woodpecker is an important nest-cavity provider (Baldassarre 2014), so these confirmed breeding records are noteworthy in being beyond this woodpecker's northern range limit. These records support previous suspicions of a substantial northward range expansion (Baldassarre 2014). Jehl (2004) noted the Hooded Merganser increasing as a summer visitor to the Churchill region since 1988. Hooded Mergansers readily use nest boxes, typically those set out for Wood Ducks; this is probably an important factor in the Prairie Potholes region. Little is known about moult migration, but generally short-range, northerly movements have been suggested (Baldassarre 2014).

Trends, Conservation, and Recommendations Historically, this species suffered dramatic losses due to forest clearing in eastern North America in the 19th century, compounded by its unwary nature in an age of unregulated hunting (Dugger et al. 2009). Since the mid-20th century, however, the picture has been one of recovery and even range expansion. Though statistical reliability is low because of small numbers detected, BBS trends for most regions of eastern Canada are positive. Overall population sizes are poorly known, because of limited detection by traditional waterfowl surveys (Baldassarre 2014). Despite restrictive bag limits, the estimated annual North American hunting harvest of 100,000 Hooded Mergansers seems high for a fall population of around 500,000 birds, though the proportion taken is comparable to that for Mallard (Baldassarre 2014). Modern-day hazards also include environmental contaminants, notably mercury, though levels of chlorinated organics tend to be lower than in other North American mergansers (Baldassarre 2014). Forest protection and water quality have been identified as key conservation issues (Baldassarre 2014).