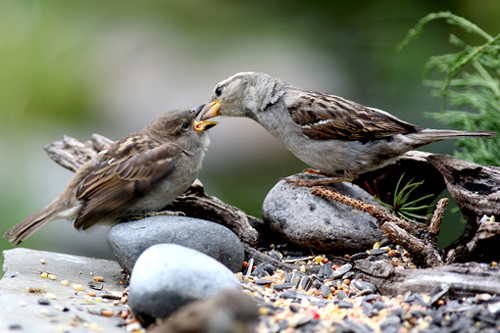 Characteristics and Range A familiar bird to most, the noisy and gregarious House Sparrow has been introduced from Europe around the world and is resident year-round in Manitoba. Females are a drab greyish-brown overall with buff, black, and brown striping on the wings and back. Males have a black throat and bib which darkens over winter into the breeding season (feather wear removes the paler feather tips), and a rufous neck and upperparts contrasting with a grey crown. In North America, this species is now found across much of the continent from the treeline south, but it is thinly distributed north of southern Canada (Lowther and Cink 2006).

Distribution, Abundance, and Habitat The House Sparrow is typically a cavity nester that is strongly associated with human settlements such as towns and farmsteads and is rarely seen in undisturbed habitats. The distribution documented by the atlas is very similar to that depicted in The Birds of Manitoba, with the majority of records occurring south of a diagonal from the Pinawa area northwest to The Pas. Within this stronghold, the House Sparrow was found in 84% of surveyed squares in the Prairie Potholes, with much lower occupancy in the Boreal Taiga Plains (23%, mostly in the south) and Boreal Hardwood Transition (26%, mostly in the west). Northern locations for this species are mostly associated with towns or small settlements such as Ponton, Wabowden, Thompson, and Churchill. The most exceptional northern outlier was a pair using a nest box on an abandoned cabin at the base of Hubbard Point (75 km northwest of the nearest breeding location in Churchill). This is ~25 km farther north of a sighting at a cabin near the Seal River in 1973 (Cuthbert 1973). The relative abundance is doubtless influenced by high concentrations in Winnipeg (clusters in other towns such as The Pas likewise influence these calculations), but there is a suggested peak of abundance in the agricultural belt from Winnipeg south to Morden, as well as from Manitou west to the southwest corner.

Trends, Conservation, and Recommendations From a mere 50 pairs introduced in New York in the 1850s, the North American House Sparrow population had grown to over 150 million birds by the 1940s (Wing 1943). It was first recorded in Manitoba in 1892 and became widespread within 15 years thereafter (The Birds of Manitoba). Since at least the mid 1960s, the population has shown signs of decline. BBS data reveal significant long-term decreases in Manitoba and Canada. These declines may be linked to changes in agricultural practices and pesticide use (Lowther and Cink 2006). Changing residential building practices (less heat loss, fewer accessible cavities) and changing farmyard architecture (fewer wooden barns and sheds, more sealed metal structures) probably also negatively affect population densities (P. Taylor, pers. obs.). As an introduced species, the House Sparrow is not of conservation concern in North America; however, monitoring of its competitive influence on native species, especially other cavity nesting species, is warranted and an understanding of its decline is desirable.