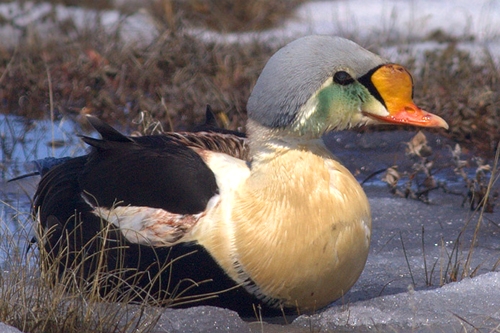 Characteristics and Range The King Eider is slightly smaller than the Common Eider and about the size of a Mallard. Breeding-plumaged males show more black than Common Eiders, while the head is pale bluish, with an orange shield above the red bill. The female is cryptically marked in shades of brown, but can be distinguished from the female Common Eider by her shorter bill and fine plumage details such as the scaly-patterned flanks. The King Eider is a High Arctic species, nesting as far north as Ellesmere Island, northern Greenland and northern Eurasia, making it one of the northernmost breeding birds in the world (Powell and Suydam 2012). The breeding range also encompasses western Hudson Bay south to Arviat, and a few disjunct areas farther south. Most birds winter in the northern Atlantic and Pacific oceans, with small numbers at polynyas near the Belcher Islands in Hudson Bay. Occasionally, birds have been found in the Churchill area during winter and there are six nesting records for Manitoba (The Birds of Manitoba).

Distribution, Abundance, and Habitat During the atlas period, possible breeding was recorded in only two squares: single males were observed on two tundra ponds south of Cape Churchill on 20 June, 2012. Other birds seen early in June at Churchill were considered non-breeders. Nesting has occurred around Cape Churchill and La Pérouse Bay and the few records may underestimate occurrence, especially because females easily escape detection (Jehl 2004). There are also breeding records for the Cape Henrietta Maria region of Ontario (Sutherland et al. 2007c). Habitat used for nesting consists of tundra-pond edges and islands, often near the sea; birds will feed on invertebrates both at sea and in the breeding ponds (Powell and Suydam 2012).

Trends, Conservation, and Recommendations Changes in sea ice and prey availability due to climate change may have an impact on this species, as may exploration for oil and gas (especially in Alaska) and over-hunting (Powell and Suydam 2012, Baldassarre 2014). No specific recommendations can be made, due to the species' low numbers in the province.