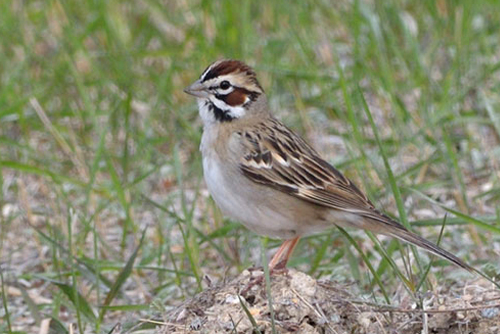 Characteristics and Range This large sparrow is distinguished by its striking facial pattern and, in flight, the extensive white corners to its slightly rounded tail. The song is an exquisite medley, reminiscent of Vesper Sparrow but more complex, often delivered from a roadside wire or other conspicuous perch. The breeding range covers much of central and western U.S.A., extending into Canada locally in southern portions of the four western provinces, and also including central northern Mexico. The primary winter range is from Texas and western California to southern Mexico (excluding Yucatán and other southeastern regions), with localized occurrence in southern Oregon and Idaho (Martin and Parrish 2000).

Distribution, Abundance, and Habitat Lark Sparrows were detected primarily in the Prairie Potholes (47% of squares with ≥3 hours of survey effort), with limited occurrence in the southern Boreal Taiga Plains and a few squares in the western Boreal Hardwood Transition. Records in the Interlake and western Manitoba extend a little north of the estimated range limit in The Birds of Manitoba. Though mainly concentrated in southwestern Manitoba, the Lark Sparrow is not closely associated with remnant grasslands or with the region's famous potholes and wetlands. Rather, it reaches greatest abundance in lightly wooded, sandy terrain, including major post-glacial features such as portions of the former Assiniboine Delta and the present upper Assiniboine River valley, and smaller features such as the Oak Lake and Lauder Sandhills. Peak probability of occurrence is associated with the Assiniboine River, the southernmost portion of the Manitoba Escarpment (east of the Pembina River valley), and parts of the extreme southwest. Areas of elevated abundance are similar, but a little more expansive. Secondary regions of occurrence include the western Red River valley and the plains immediately east and north of Riding Mountain. The species is scarce and localized elsewhere, up to the fringes of the boreal forest. The Lark Sparrow is tolerant of a certain degree of land disturbance or development, often being conspicuous along roadside verges in sandy terrain, and also occurring in cemeteries (Walley 1985) and market gardens (locally near the lower Red River).

Trends, Conservation, and Recommendations Continent-wide population trends from BBS analysis are mixed, but numbers are currently stable overall, with significant upward trends for both Manitoba and Canada. This species may benefit from management efforts that enhance edge habitat between wooded and grassland areas, whereas intensive control of grasshoppers may adversely affect it (Martin and Parrish 2000). The Lark Sparrow occurs in a number of conserved sites such as provincial parks (e.g., Spruce Woods, Birds Hill), Nature Conservancy of Canada properties (e.g., Ethier Sandhills), wildlife management areas (e.g., Lauder Sandhills), and local recreational parks (e.g., Coulter). Given this degree of incipient protection and the species' tolerance of moderate land disturbance, plus the long-term increasing population trend, the Lark Sparrow's future in Manitoba seems promising.