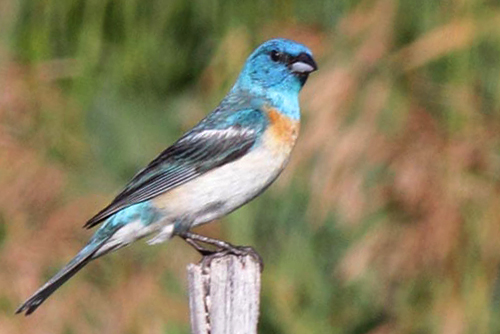 Characteristics and Range The Lazuli Bunting is the western counterpart of the closely related Indigo Bunting. In size and shape both species are very similar, but male Lazuli Buntings are paler blue and sport two bold white wingbars. In addition, they have orange breasts and white abdomens. Females are similar to female Indigo Buntings, but they are more warmly coloured and lack any streaking on the underparts.

Distribution, Abundance, and Habitat Hybrids between the two species have been reported frequently, including during the atlas period at Lyleton and Portage la Prairie. Such birds show various intergrades in plumage, but males are generally paler than Indigo Buntings; they often lack the orange breast, but do sport wingbars (pers. obs.). Hybrid females may be impossible to distinguish visually from pure birds. The Lazuli Bunting breeds from southern British Columbia to extreme southern Saskatchewan and south to the southwestern U.S.A. and Baja California. It winters almost entirely in western Mexico (Greene et al. 2014).

The only potential breeding record during the atlas period involved a pair on territory near Lyleton, the male having been present at the same location from at least 2010 to 2012 and later; for example, in 2017 (C. Artuso, pers. obs.). There are about 50 records province-wide for this species and hybrids, including sightings in 1972 and 1975 at Riding Mountain National Park that suggested local breeding (Walley 1973). Like Indigo Buntings, most Lazuli Buntings in Manitoba have been associated with open mature deciduous woods, especially in riparian areas.

Trends, Conservation, and Recommendations Many populations of the Lazuli Bunting appear stable, and BBS data suggest a long-term increase in Canada, but this bunting is declining or extirpated in other areas, with nest predation and cowbird parasitism listed among possible causes (Greene et al. 2014). Occurrence in Manitoba is too rare and irregular to warrant special measures.