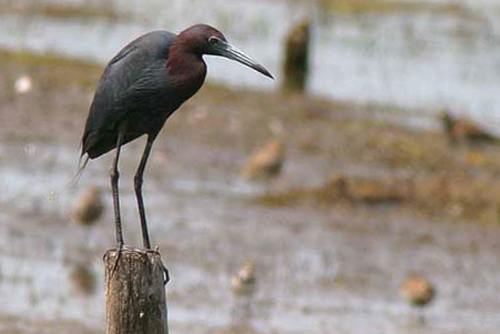 Characteristics and Range The Little Blue Heron is a small, slender wader, less than half the size of a Great Blue Heron. Adults are easily identified by their dark blue and purplish plumage, but juveniles look almost identical to Snowy Egrets. As the birds mature, the white is patchily replaced by bluish grey, taking two years to attain full adult plumage. Little Blue Herons nest regularly from the southeastern U.S.A. through Middle America to central South America. Occasional breeding has been widely reported elsewhere in North America, including the northeastern Great Plains (Rodgers and Smith 2012).

Distribution, Abundance, and Habitat On 15 August 2011, K. De Smet located a mixed breeding colony at Whitewater Lake, which contained, among others, nests of Great and Cattle Egrets and Manitoba's first known nest of Snowy Egret. At the colony were also three Little Blue Herons, but no further evidence of nesting was found (Koes and Taylor 2012a). Since 2000 there have been at least 15 sightings of the species in the province, with many of them from the Whitewater Lake area, making occasional breeding at that location seem plausible; however, at least some Manitoba records are likely a product of northward post-breeding dispersal (Rodgers and Smith 2012). Breeding has been noted in North Dakota, including in 1976 at J. Clark Salyer National Wildlife Refuge along the Souris River just south of the Manitoba border and more recently at Chase Lake (Bartos et al. 2010). There was also an instance of probable natural hybridization between a Little Blue Heron and a Cattle Egret (Bartos et al. 2010). In Manitoba the species has been found at marshes, wet meadows and along streams, where it feeds on invertebrates and small vertebrates.

Trends, Conservation, and Recommendations Little Blue Herons were never major targets of plume hunters in the 19th century, due to their dark colour and lack of long plumes. Hence, they did not suffer heavy losses as several other heron species did. During the 20th century the species has expanded its range northward; however, it is listed as a species of conservation concern in several eastern U.S. jurisdictions. This species is affected by environmental contaminants, wetland drainage and human disturbance at colonies (Rodgers and Smith 2012).