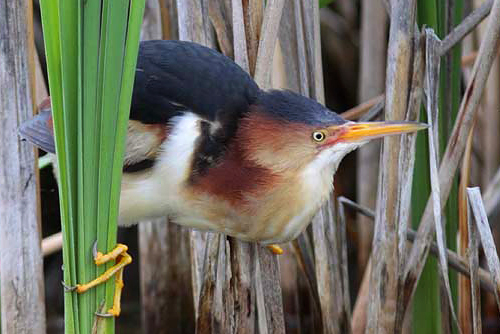 Characteristics and Range The Least Bittern is the smallest member of the heron family in North America. It is an elusive species, more often heard with its characteristic coo-coo-coo call, as it moves inconspicuously through dense cattail stands close to the water's edge from where it hunts for small fish and insects. Manitoba is at the northwestern edge of its breeding range, which extends primarily east of the Great Plains through the lower Great Lakes Basin to the Atlantic coast, with the exception of the Appalachian Range, and south to the Gulf coast. The Least Bittern winters primarily along coastal areas of the eastern and southern U.S.A. and to a lesser extent in Middle America (Poole et al. 2009).

Distribution, Abundance, and Habitat The distribution documented by the atlas is significantly more extensive than indicated in Poole et al. (2009), but similar to that depicted in The Birds of Manitoba. Atlas detections clearly illustrate this species' limited and localized occurrence here at the periphery of its range, in part due to its specific habitat preferences. Nonetheless, atlas data doubtless under-represent the extent of sites occupied because of this species' elusive nature and the difficulties in accessing large wetlands for surveys. Obvious examples of vagrancy aside, the majority of previous records in Manitoba are in the south (The Birds of Manitoba), perhaps with a core range along the boreal-parkland transition from Lake Manitoba and the southern Interlake southeast to the U.S border. The absence of atlas records from the Boreal Hardwood Transition, including the Pinawa - Hadashville area where this species was previously found with some regularity (P. Taylor, pers. comm.), is noteworthy. By contrast, a cluster of four calling birds in a large wetland between Amoskawaywe Creek and the Pigeon River represents the first record on the east side of Lake Winnipeg, the only occupied square in the Boreal Softwood Shield, and the only area of predominantly boreal habitat where the Least Bittern was detected. The westernmost records at Whitewater Lake and near Virden are also noteworthy in documenting the western range extent.This species typically nests in relatively large wetlands composed of dense, tall, robust emergent vegetation, occasionally including shrubs, and interspersed with open water, referred to as a hemi-marsh (Poole et al. 2009). The paucity of detections in eastern Manitoba discussed above is perhaps explained by a scarcity of wetlands with dense emergent vegetation within the Canadian Shield region. Wetlands with habitat attributes preferred by this species are more common in the Prairie Potholes and the Boreal Taiga Plains (where detected in 16 and 14 squares respectively).

Trends, Conservation, and Recommendations Data from the Ontario Breeding Bird Atlas and the Great Lakes Marsh Monitoring Program suggest an average short-term decline of 10%/year in southern Ontario, the core of the species' Canadian range (Archer and Jones 2009, Cadman et al. 2007). Wetland loss and degradation are likely the greatest threats to this federally Threatened and provincially Endangered species. As a visual forager that requires healthy fish, insect and amphibian prey populations, any measures that protect wetlands, and conserve water clarity, and quality by reducing siltation and chemical contamination from agricultural run-off, such as maintaining vegetated buffer strips around wetlands, would be beneficial. Where wetland loss is more substantial, the species would benefit from the creation of artificial wetlands managed for conservation purposes.